Snooki is Getting Sober, Boring, and Baby Ready! (Video) 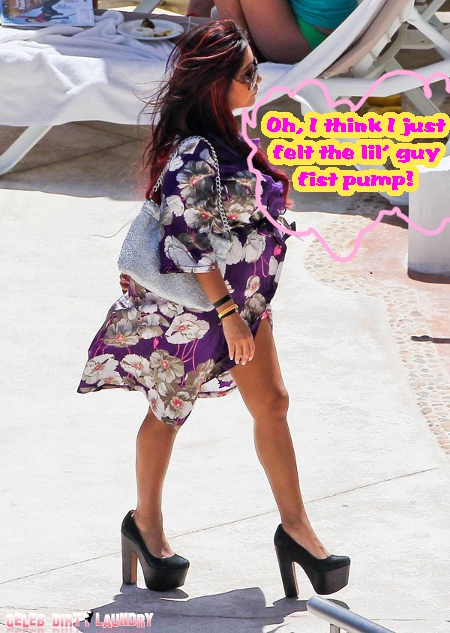 A much more sober Snooki is getting boring for one thing: her baby. Times have certainly changed for her — gone are the days of Snooki’s hard partying ways. She is officially boring, sober, and baby ready. Yikes!

While her castmates are currently up to their usual shenanigans while filming the latest Jersey Shore installement, Snooki is holding down the fort and not having any of it.  Booorrriiinggg! Who wants to see a no-fun sober Snooki?  This season is definitely going to be a change — even The Situation is sober after having just done a stint in rehab.  At least we’ll always have Vinnie and Pauly. . .

The Snookster, whose real name is Nicole Polizzi, chatted with “Good Morning America” correspondent Juju Chang in a recent interview and talked about her pregnancy and her sober days.

Snooki admitted that her hard partying ways are long gone, and that she’s ready to be a mom with her fiancé Jionni LaValle.

“Obviously, no drinking, none whatsoever,” Snooki said. “I’m scared to even have caffeine. My friends were like, ‘You can have a glass of wine’ and I’m like no, I refuse. I’m going to be that person who has a glass of wine and [the baby] comes out with three legs.”

What else has Snooki given up? Spray tanning . . . obviously.  One thing she refuses to give up however is her high heels.

“I feel confident in them, and I know I’m not going to fall, so until it feels very uncomfortable, I’m still going to rock them, I’m only 24 and I’m pregnant — it doesn’t mean I need to be wearing flats and ugly shoes. I can still look good.”

Well there you have it.  It’s a relief to know Snooki will be ready to pop at 9 months but still be wearing 10-inch heels. I can sleep well tonight.