Snooki Is Pregnant And Set To Reveal It On TV 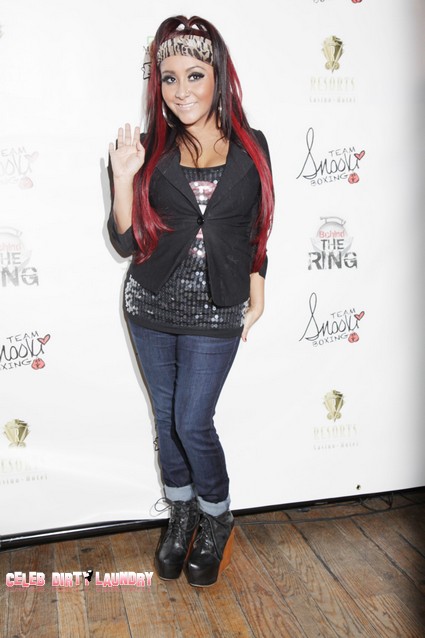 Nicole ‘Snooki’ Polizzi is pregnant by her boyfriend Jionni LaValle and is trying to hide the news! Jersey Shore will be getting more crowded once Snooki gives birth to her little one. Snooki’s pregnancy will be revealed as part of Jersey Shore spinoff show that might be like a slightly upscale ‘Teen Mom’ except the Snooki is 24 years-old.

Star Mag broke the news reporting that an insider said:  “She is pregnant and has only told her closest friends and some family”

Apparently loud mouthed Snooki is dropping hints about her pregnancy all over the place. Consumed with happiness the source claims:  “She’s been telling people that she has a big announcement coming.”

Snooki is slated to star in a Jersey Shore spin off with her MTV co-star Jenni “J-Woww” Farley. Part of the plot of the ‘reality’ show will be Snooki’s arrival on the new series and her pregnancy will be a major feature.

According to the source:  “They are having to redo the creative direction of her spin-off because of her pregnancy.”

Snooki has not been dropping weight to attain a healthier and slimmer appearance but has been dropping hints on Facebook and Twitter that she is pregnant:

“I feel sick,” she admitted in a January 25 post on her Facebook page, then later tweeted: “Late night craving…yogurt hits the fricken spot!”

If Snooki is pregnant then we wish her congratulations. Since Kim Kardashian married and divorced for her TV show, is it far-fetched that Snooki got pregnant for hers? What do you think? Please sound off in the comments below.