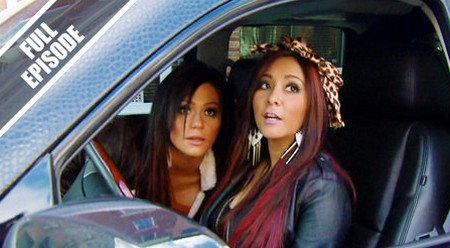 Tonight our favorite Jersey girls are back with an all new episode of Snooki & JWoww titled, “What did I get myself into?”. Have you been watching Snooki & JWoww’s new show, did you see their premiere episode on June 21st? Sound off your comments and tells us what you thought?

Last week, JWoww (Jen) and Snooki (Nicole) wanted to move out into an apartment together and the girls are thrilled about it; “Nicole and I are moving in together ’cause I’m turning 30 in a couple of years and that’s it” and “Thirty is my limit. So I have three years for like a bucket list to get everything done.”

Nicole’s mother tries to warn the girls before they move out that they will be responsible for laundry, grocery shopping, and cleaning up after themselves, but this doesn’t deter the girls whatsoever. Before they sign the lease, there is a little surprise that Nicole has for Jen, there will be three in their new apartment, not two because she is pregnant! And, just to top that one off, Nicole is engaged, Jionni proposed and they are getting married.

Tonight, the girl’s boyfriends visit the apartment for the first time and it doesn’t take long for a fight to start over Jionni’s bachelor party.

“Snooki & JWoww” airs tonight at 10:00pm. Don’t forget to come back to Celeb Dirty Laundry each week because we will be live blogging the show with all the up-to-the-minute details.  CDL your one stop shop for all reality TV and television series recaps!

RECAP: Snooki is nervous that JWoww is not going to want to live with her. JWoww doesn’t want to be a mom to Snookie, she is worried that that is where the relationship will go during her pregnancy.

The real estate agent arrives and the girls do it, they sign the lease. Snooki says her dad is going to kill her, she signed the lease and didn’t read it.

Snooki is with her mom and dad, she tells them that they signed the papers and they are moving in tomorrow. Her dad starts to ask her questions, but she can’t even answer any.  Meanwhile, JWoww is still shocked and tells Roger that Snooki is pregnant and Jionni proposing to her. The reality is setting in for JWoww, she is moving in with a chic that is pregnant and engaged.

Jionni arrives at Snooki’s house and surprises her, he knows that she told JWoww about their news. Jionni wants to rub her belly, but Snooki thinks it is creepy.

Roger notices that JWoww’s car is leaking something, she thinks it is a sign that she shouldn’t move in with Snooki.

Roger calls Jionni and congratulates him then says that JWoww wants to go out to dinner with them tomorrow for her birthday, it’s planned.

Roger offers his truck to JWoww, but it’s a stick and she doesn’t know how to drive it.

Snooki and Jionni are packing her truck, while JWoww and Roger are on their way to the new apartment with her stuff. The girls arrive, but Joinni didn’t come with her, so Roger has to haul all the luggage. Snooki tells Roger that his sperm is getting really old, so he should make JWoww pregant, that way they can be pregnant together. Roger claims it’s been a year since they have had sex.

JWoww’s dog poops on the floor, the girls are both exhausted and they are calling it a day.

It’s official the first day in the apartment and the dog wakes up Snooki at 7am. It’s JWoww’s birthday and Snooki puts a candle in a bagel and wishes her Happy Birthday.

It’s still smelling like poop in the apartment, the girls are cleaning and arranging furniture.

It’s night, Roger arrives with flowers for JWoww and Jionni brings a cake. Roger puts in an official request for Jionni’s bachelor party, but Jwoww doesn’t want him to have him because guys get grimey ass strippers at them. Snooki thinks JWoww is being a b*itch, she doesn’t let Roger do anything.

That’s it, in the next episode Snooki has her doctor’s appointment and gets to see the baby move.