Snooki Trades In Drinks with Ice for Ice Rinks 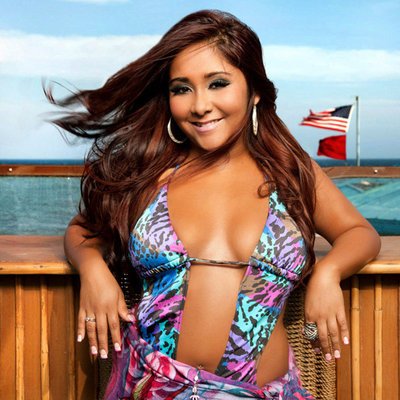 What’s a girl to do when she can’t go clubbing and get falling down drunk with her favorite guidettes?  Well, Snooki decided to swap drinks with ice for skaters on ice, as she attended a hockey game with baby daddy, Jionni LaValle.  The Jersey Shore reality TV star took in a New York Rangers and Ottawa Senators game on Saturday.

Snooki, real name Nicole Polizzi appeared to have a great time, smiling and laughing with Jionni in spite of the Rangers losing on home ice at Madison Square Garden.  She was also fully covered for a change, wearing a buttoned up, long sleeve white shirt. A far cry from the tight mini-dresses usually associated with the star.

The pregnant 24 year old will be heading back to Seaside Heights soon to begin filming the sixth season of Jersey Shore.  It has been rumored that the infamous Smush Room will be converted into a private bedroom for Snooki.  Is giving her a separate bedroom really enough to keep mother and baby safe in that house at the Jersey Shore?

Between the excessive partying and the endless fights that usually end with furniture being toppled, it hardly seems a good environment for a pregnant woman to willingly put herself in. It’s hard to imagine the money being worth the inevitable discomfort that’s around the corner for Snooki.

Should Snooki return to film another season?  Should the powers-that-be allow her back?  What do you think?  Leave us a comment!