Snooki’s Ex-Boyfriend Is A Vile Human Being 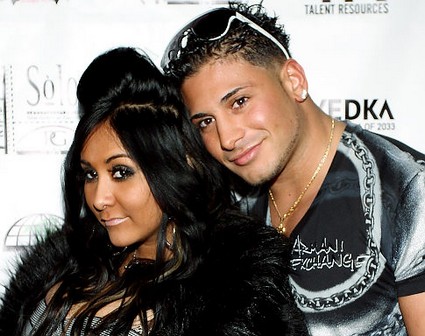 I’ll be the first to admit that the thought of Snooki having a wee little mini meatball at the young age of 24 is pretty outrageous – but to wish her – or anyone ill for that matter with regards to her pregnancy – is a whole different story.

The Snookster has yet to confirm as to whether she’s carrying a bun in the oven or not, but according to almost every website it’s pretty much a matter of time before it is confirmed.  Hey, truth be told (and planned or not planned) Snooks has been in a stable relationship with her man Jionni Lavalle for quite some time and has always maintained that he’s ‘the one’.

So who the heck is this so-called ex of hers who has popped up out of nowhere and has the audacity to say, “I hope for her sake…not to be rude or anything…but I hope she has a miscarriage.”

Not to be rude?  Are you kidding me?  Forgive me for being too aggressive but I’d like to put Emilio Masella in small room and give him a piece of my mind.

Crawl back into the whole you came from and find your two minutes of fame elsewhere.  The fact that I’m even writing about him is disturbing, but at least this way people can see what an evil person he is.  To wish ill about something like that is vile.  Douche!