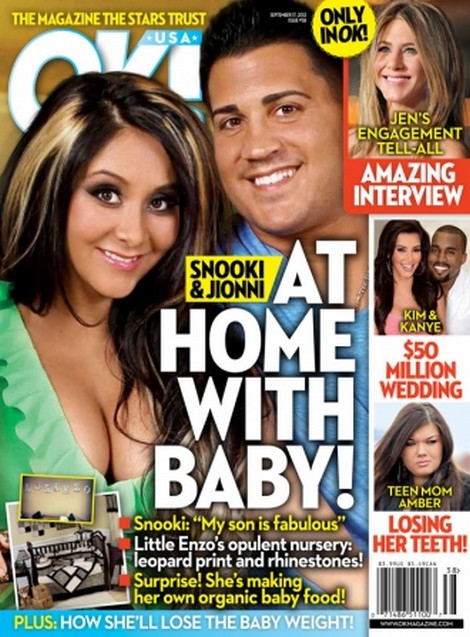 When Nicole “Snooki” Polizzi and Jionni LaValle brought their new son Lorenzo “Enzo” Dominic home they decided to welcome him with the help of OK Magazine.  The latest issue takes us inside the already spoiled newborn’s nursery which is decked out in Jersey-fab leopard print and rhinestones!  Learn all about the new parents’ first week at home with their “fabulous” son and to all those who wondered if Snooki would be a good mom- she’s actually making her own organic baby food!

Jennifer Aniston is also opening up about her engagement details, finally!  The latest issue has the scoop from the actresses’ amazing new interview.

OK also claims that Robert Pattinson is destined to ultimately become an even bigger star thanks to the scandal caused by his home wrecking ex girlfriend, Kristen Stewart.  His likability rating has dropped in recent weeks but the experts claim that he and his career are about to sky rocket. No one likes to see an innocent guy fail and his career will likely reflect that after this bump in the road.

Did you know that Kim Kardashian’s next marriage comes with a ready-made price tag? She’s claiming that she won’t marry Kanye West until she is worth at least $50 million!  You’ll have to grab the latest issue to read the details on that ridiculousness.  Also inside is an update on some of our favorite Teen Mom jailbirds. Amber Portwood’s teeth are falling out from all that drug use and of course, Jenelle Evan’s is in more trouble. I have to wonder if these girls would have fared better without the fame (and all of its trappings) that MTV brought to them.

Grab the latest issue of OK to get more in depth information on all of these stories and a bunch more!