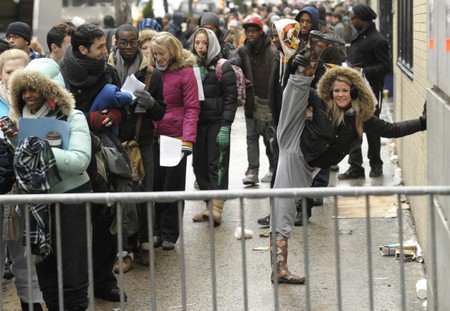 So You Think You Can Dance 2012 returns tonight with  a two hour premiere, a new season and big changes.  They have cancelled the results show for this season and the show will just air once for two hours.  The two hour show will include both performances and elimination.

That is not the only change, this ninth season will also have two champions, a male and a female.  Don’t let the changes worry you SYTYCD will continue to bring us diverse talents and peculiar personalities.

Tonight’s SYTYCD auditions start with Dallas and New York. We will be live blogging the premiere episode tonight with all the up-to-the-minute details so don’t forget to come back and spend the evening with us.

This season there will be 18 contestants, 9 boys and 9 girls. Tonight’s show begins begins with general auditions, before finalists are chosen.  There will be no one going home – so no elimination tonight.  Mary Edwards said about the Dallas and New York auditions, “New York brought it this year,” she adds. “And that did not happen last season, so we were pleasantly surprised that New York was awesome. Atlanta again — crazy, crazy good. And then of course, L.A. didn’t disappoint. Dallas, some stars came out of there, but not as strong as some of the other big cities.”

As the contestants are eliminated and when they are down to the top 10, each finalist will join up with a SYTYCD all star.

So you think you can dance is hosted by Cat Deeley and she joins judges Mary Murphy, Nigel Lythgoe.

We will be live blogging the So You Think You Can Dance premiere from 8pm – 10pm EST.  So make sure to come back to this spot and spend the evening with us enjoying the fabulous dancers!  Make sure to refresh often so you get the most up-to-date info!

RECAP: It’s back! Ballroom, Contemporary, Swing, Afro and any other kind of booty shaking that you can think of takes center stage on season 9 of “So You Think You Can Dance.”

New York City, undoubtedly the self proclaimed dance capital of the world, is the first stop on the audition tour. Joining Nigel Lythgoe and Mary Murphy on the judging panel here is Tyce Diorio– a chorographical genius.

First up is Amelia Lowe, a girl straight out of the silent film era, flapper hair and theatrical look to her. After such a big package on her before she danced, I kind of thought she’d be good- and I was right. She performs a unique contemporary routine to French music and makes it right on through to the Vegas round.

Next up is a red haired Toshihiko (no really crayola red) hip hop/locking dude from Japan. I could watch him all day long. ALL day. You just don’t know what he’ll do next. He’s smooth but hits hard all at the same time. Judges loved him to pieces, Tyce said his body is like a musical instrument and he just plays whatever the music asks.

Obviously, SYTYCD has it’s share of bad or gimmicky dancers, enter Austin Freeman dressed as a nerd. He wants to be a celebrity and wants to share the “Freeman Fever” and teach them all how to do “Mr. Wiggles”.

A Philly street performer caught my attention next. Breakers like Shafeek Westbroke are simply amazing. His stops, breaks and smooth control are a gift and a half. He “moves like silk”, according to Tyce. Straight to Vegas he goes.

Leo Reyes decided to audition to make his mom proud. She has had a hard life and attempted suicide. He wants her to see that he has a gift that she needs to live to watch. He game me chills with a combo of contemporary set to Lil Wayne. Judges had tears while putting him through to Vegas.

Day two in NYC is a little less amazing. Cue the parade of belly floppers, variations on the running man, cabbage patch and anything else that causes the judges to lose their will to live.

Chehon Wespi Tchopp is a ballet dancer by definition but by this performance he is seductive and dripping with talent. Sending him straight to Vegas was a no-brainer.

48 contestants made it to Vegas based on two days of NYC additions.

On to Texas we go to find more talent. At the Dallas audition stop Lil C, creator of Crump, joins the judging panel. First up is Bree Hafen, mom of two. Her babies sit and watch from Nigel’s chair. Bree is a very good dancer with a stunning line and extension. Her son brought her ticket to Vegas on stage for her but quite honestly her two year old may have upstaged her. Little Stella in a big pink tutu attempted a full out contemporary routine, baby style.

Exorcist Style? I guess lots of people are creating their own styles this year. Exorcist Style by Stepheon Stewart is all about the eyes, says he. There is a straight up creepy feel to his moves and those moves are something else. He is really cool but I’m not sure that he can conquer something like ballroom if he makes it to the next round.

Another wave of talent rolls into Dallas for the second day of auditions. The judges are still flying high after a great first day. Daniel Baker from Australia is up first. He lives in San Francisco now and says that a childhood book with great US photos inspired him to come here. He works for the San Francisco Ballet and has risked the job with them to audition. His ballet training is totally on display and the 23 year old is a whirling dervish that is now heading to Vegas.

Sam Shreffler hopes that a “little bit of this and a little bit of that and a dash of this” will win over the judges. Sam has a bit of autism and was mimicking the waves in the ocean. That’s what he said anyway.

Every year has a gimmick. Von Kipper, “Legend”, admits to disliking the show and completely rips apart the heart and soul of it. He then cracks out a freestyle audition that was really rough and in the end his dancing just didn’t cut it.

Next up is Jarell Rochelle. His mother is nearly blind and Nigel offers her his chair to watch her son dance. Jarell has devoted the last year of his life to perfecting his craft so that his mom can enjoy it. He was a joy. He danced, mimed, interacted and went on to Vegas, of course.

This show is extremely influential. Several kids on camera tell about how if not for SYTYCD they’d never have set foot on stage. It’s amazing to think it has been on the air so long that kids have been raised on it. It has definitely made a positive impact on young dancers coming up and hoping for a shot at stage or screen time.

Next week we’ll hit Los Angeles for heat on the audition stage. Stay tuned as we work our way to Vegas week! If tonight was any indication, it’s gonna be a great summer!