“Sons of Anarchy” Season 5 Episode 11 “To Thine Own Self”: Preview and Spoilers! 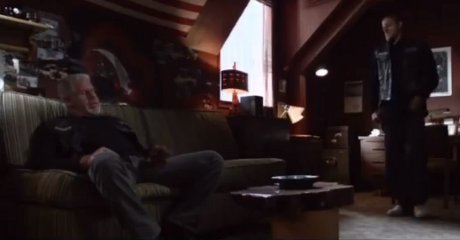 Sons of Anarchy is giving us one wild ride as of late, and we know you can hardly wait for next week’s episode, especially after last night’s drama-filled display of action packed thrill-age. As always, we have the preview for next week’s episode, which is currently titled “To Thine Own Self,” and a few spoilers to whet that tv-loving appetite of yours. However, as always, if you’d rather not have your SOA experience spoiled, then look away now!

On last week’s episode, Juice found out that his cover has been blown — and that Jax knew he was responsible for giving up the club. Sneaky, Juice, but not sneaky enough. Juice was told to run and get out of Charming as fast as he could — if he valued his life at all. Jax and Tara also shared an intimate moment as well. “We’re gonna get through this like we did with everything else,” Jax said. “That’s what scares me the most,” Tara said with a concerned tone. What was your favorite moment during last night’s episode?

On Season 5 Episode 11 “To Thine Own Self,” we’ll see Jax in an sticky situation. He’s in a small room with Romeo, who says, “May I remind you how easy it is to disappear.” To which Jax responds with, “And, yet, here I am.” There’s definitely a lot of tension in this scene, which is presented in the promo video we have for you below, and we can’t wait to see where that dialogue goes — probably nowhere good.

Immediately following that scene, we get a glimpse of a brutal gun fight, which leads to a nasty car crash. Will the people in the car make it out alive? Meanwhile, Clay’s situation continues to escalate, and he’s forced to confront the people who continue lurking in his shadows.

What do you think of this season? Are you enjoying the wild ride, happy to see where the stories are going? Let us know what you’re enjoying most about the season. Catch Sons of Anarchy Episode 11 “To Thine Own Self” next Tuesday on FX — for another special 90-minute episode. Watch the preview below!