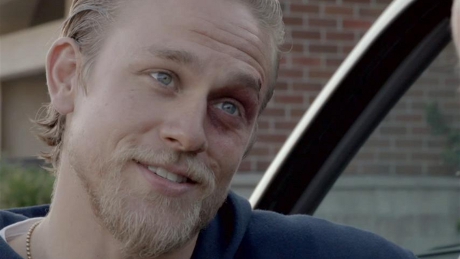 Sons of Anarchy is just starting to heat up in its fifth season on the air, and after the conclusion of Tuesday’s episode, I have a feeling you’re itching for some spoilers — or at least a preview of what’s to come on next Tuesday, October 9th’s episode, which is titled “Orca Shrugged.” If spoilers and teasers make you uncomfortable, then divert your eyes and attention now so we don’t totally ruin your nail-biting love affair with SoA.

On the last episode of Sons of Anarchy, we witnessed the burial of Opie, which made for a bit of a slow but emotional show. Not a whole bunch of plot development in the last episode, which was titled “Stolen Huffy,” but we did see an alliance form with Nero, so it’ll be interesting to see where that new relationship takes the show in the future.

On next week’s episode, Jax attempts to pull Samcro into a new business venture, there’ll be some gun-running, as well as some good ol’ fashioned blackmailing. Because, honestly, who doesn’t love a good blackmailing? Jax desperately tries to get the club to shift its focus and get it geared up to head in a new direction, down a difference path of sorts, but will this be a successful endeavor? Will he get in over his head?

Nero also strikes a bit of fear into Gemma’s eyes when he throws her up against the wall, a scene that is teased in the following preview. If you thought last week’s episode was a little dull and too emotional for Sons of Anarchy, then get prepared for this intense, action-packed, explosion-y episode that, I’m pretty sure, will have you shaking your head and gasping all night.

Sons of Anarchy airs on FX every Tuesday nights at 10PM. Make sure to tune in and, if you’re a fan of the show, don’t forget to tell us what you thought of the first four episodes and where you think the character’s are headed this season. Morals have always seemed a bit ambiguous on this show — so who knows when these characters will stumble over next. Watch the preview of “Orca Shrugged” below.