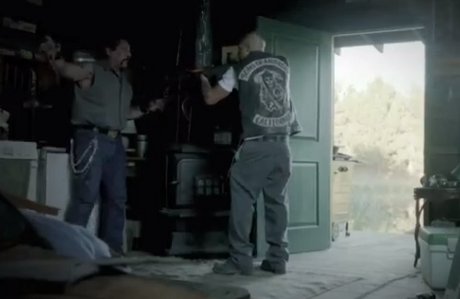 Sons of Anarchy will be back next week with an all new, action-packed, drama-filled episode, so if spoilers and previews upset your stomach then divert your attention now. Don’t say we didn’t warn you. On the upcoming episode, which is titled “Andare Pescare,” suspicions and tempers continue to grow — and that can only lead to one thing: trouble! On last week’s episode we saw Eli tell Jax that some shady people began talking to the feds. And after he made that announcement, Eli made an interesting proposition. “Give ‘em to me and I’ll give you the rat at your table,” Eli says. We know the rat to be Juice.

In the new promo clip, which we have for you below, Jax — as always — finds himself in a tight spot with a gun pointed at his face. But, then again, many characters find themselves with guns pointed at their faces. *sigh* That’s never a wonderful situation to be in, is it? Jax continues to grow extremely suspicious of Clay, and he realizes that he needs to find Frankie — who’s purchased mob protection — before Clay finds him and throws his whole world askew.

So with everybody gunning for Frankie Diamonds, paths are sure to cross and crash. The club is hunting down Frankie because he’s apparently the only one that can validate the truth about Clay, who is also on the hunt for Diamonds as well. Basically, the situation is just one hot disaster, and it will be interesting to see how it all plays out and who manages to get Frankie in their grimy, corrupt paws first.

As always, the promo clip reveals some action, and next week’s episode promises to be one that will leave you on the edge of your seat. Watch the preview below and let us know what you’re excited about! How do you feel about this season of Sons of Anarchy? Is it going well for you? What do you want to see happen next? Any characters that are just getting on your nerves? Season 5 Episode 9 “Andare Pescare” airs Tuesday, November 6th on FX. Check it out and make sure to come back to CDL for all your TV spoilage needs!