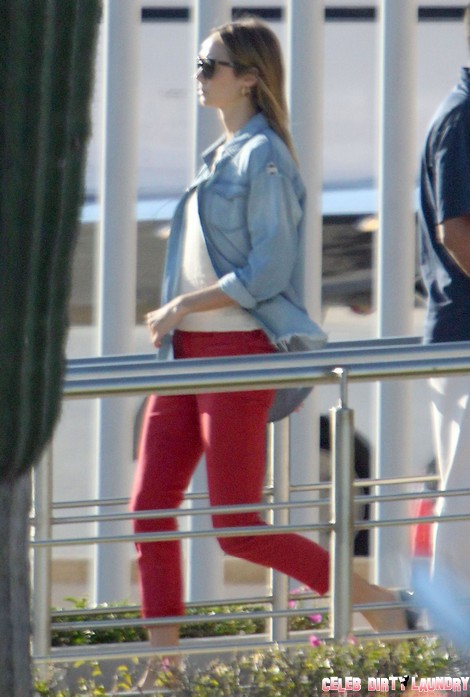 Stacy Keibler, the George Clooney babe, is allegedly setting her sights on the juggernaut reality television spectacle that is American Idol. According to the latest Star Magazine report, “[Keibler] stepped up her efforts to milk the George machine for all it’s worth – because she fears her famously restless boyfriend might be getting ready to move.” A source close to the situation told Star magazine, “Stacy’s desperate to land something meaty before the Clooney halo of publicity evaporates.” Right, and American Idol is the only thing she could have thought of? What is she going to do on the show? Judge?

The insider continues, “Rumor has it, she’s on a mission to get a spot on American Idol. She was all over Randy Jackson at the AMAs recently, hugging and getting all touchy-feely – which completely baffled everyone.” Well, we once became touchy-feely with a homeless woman who looked like Debra Messing – blame the copious amounts of Tequila shots – so perhaps Keibler was just drunk out of her mind and thought Randy Jackson was a loveable Michelin Man? It’s a very valid possibility!

According to infamous gossip myth busters, the report in Star magazine is as fictitious as Aunt Mildred’s breasts, and that Keibler has “already lined up a hosting gig on the upcoming ‘Supermarket Superstars’” – a reality television show about fast food entrepreneurs who pitch their product-inventions to a star-studded industry judging panel. The winner will walk away with a nationwide launch of their product in a supermarket – much like in the vein of ever other reality television food show currently being aired.

While a judging gig on American Idol might have been Keibler’s dream, she will have to make do with sweaty burgers and junkyard contestants on a (hopefully) very short-lived reality TV farce. It’s not Idol, but it’s at least something to keep her in the eye of the adoring public!

Do you think Keibler would be a good fit on Idol? Do you think she has any experience to judge the show? Let us know your thoughts in the comments below.