Star Trek VS The Incredible Hulk 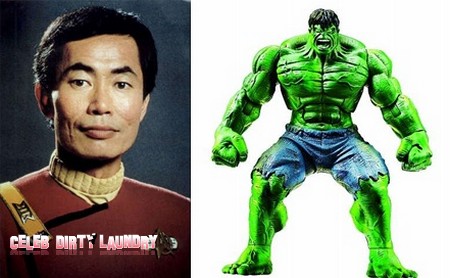 Donald Trump recently announced on the Today Show the new cast for The Celebrity Apprentice, two of the eighteen celebrities are George Takei who played Sulu in Star Trek and Lou Ferrigno who played the The Hulk in the 1977’s The Incredible Hulk.

Both George and Lou will be facing off against sixteen other celebrities for the chance to win $250,000 for their charity. For the people out there who aren’t familiar with The Celebrity Apprentice I’ll make your lives so much easier. The show is about two teams of celebrities who are given weekly tasks to complete. These tasks are given by no one other than Donald Trump himself. The celebrities will have to undergo long difficult hours, strict deadlines and fights between team mates. The team leader of the winning team will get a check that will go to the charity they are supporting, while the losing team leader and another team mate will have to go and defend themselves by saying why they believe they shouldn’t get fired. In the end there will be two celebrities against each other to win the $250,000 check and the privilege to brag to friends, families and colleagues about being The Celebrity Apprentice.

I hope George Takei wins and there are two reasons why I think he should. First of all he’s a very nice guy and I’d hate to see him fired in the beginning, because after all, he was Sulu in Star Trek and that’s awesome!