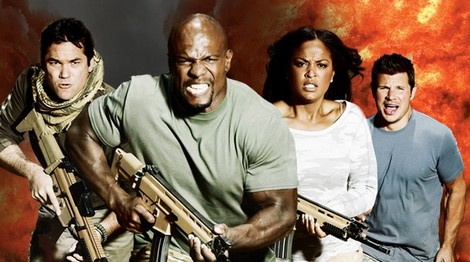 Stars Earn Stripes is NBC’s newest reality show that is a competition between celebrities who will participate in real military missions and exercises. There will be no shortage of helicopter drops and long-range weapons fire when the stars are trained by elite military and first-responder operatives.

The eight celebrities will be paired up with an operative and battle it out through missions where they will be tested both physically and emotionally, they include; Sarah Palin’s husband Todd Palin (yep, he’s really not famous for anything else), actor Dean Cain, boxing champion Laila Ali, actor Terry Crews, pop singer/actor/producer Nick Lachey, Olympic gold medalist Picabo Street, Biggest Losers’ Dolvett Quince and WWE Diva Eve Torres. No surprise that Palin is joining the show, since one of the executive producers, Mark Burnett, also produced his wife, Sarah Palin’s Alaska.

The celebrities will be playing for themselves and their charities; “The Badge of Honor Memorial Foundation” for Nick Lachey, “Got Your 6” for Dolvett Quince, “Military Child Education Coalition” for Laila Ali, “Hiring Our Heroes” for Picabo Street, “The Pat Tillman Foundation” for Terry Crews, “USO” for Eve Torres, “Wounded Warrior Project” for Dean Cain and “Armed Services YMCA Alaska” for Todd Palin.

The show is a homage to the men and women who serve in the military in active duty, it will certainly be interesting to see if these spoiled celebrities can handle the tough training that these decorated war heroes will dish out when they push them to their limit.

Stars Earn Stripes has already had it’s share of controversy when Sharon Osbourne’s son, Jack Osbourne who was recently diagnosed with multiple sclerosis, was let go from the cast two days before filming. Although there is a lot of speculation that the reason Jack didn’t make it through was his recently diagnosed medical condition, co-producer David Hurwitz said,

“Jack was a real enthusiast. He had a real interest in doing it. Unfortunately, though, because of the strains and rigours of not only the show but also our intense shooting schedule, it was best not to go with him at this time. He was just one person, along with the eight who made it and a few others, who we were in talks with. He did not get penciled into the final lineup. Prior to us making our decision, it was found out that the rigours of the show were too intense for him.”

Stars Earn Stripes airs Monday, August 13th on NBC at 8pm, what do you think about the new show? Do you think our celebrities will be able to handle one of the toughest competitions ever on reality TV?

Don’t forget to come back to CDL for all the up-to-the-minute details, in the meantime, enjoy the previews.

As Intense As It Gets

Toughness and Courage – Laila Ali knows tough, and she’s never faced anything like this.