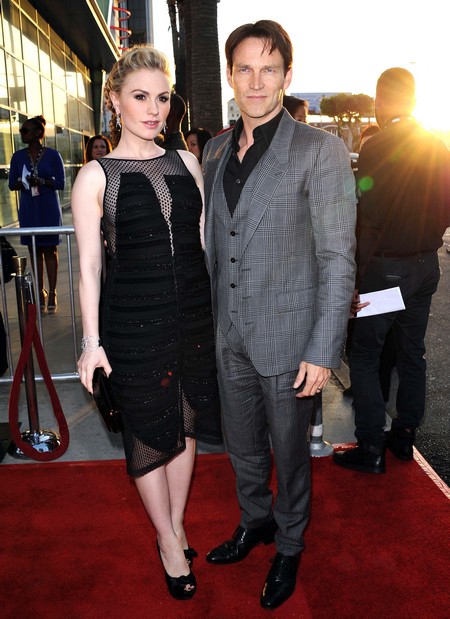 It is officially confirmed that True Blood lovebirds Anna Paquin and Stephen Moyer (both on and off screen) are expecting twins!! What is in the water in Hollywood?  Twins are a plenty!

Anna, 29, and her husband Stephen, 42, will be pulling double duty this fall – and both are said to be over the moon. Their co-star Sam Trammell is equally excited for them, as he is father to 11-month-old twins Winston and Gus with girlfriend Missy Yager.

So basically, if you’re affiliated with the True Blood production and are expecting, chances are that you will be having twins. Got it. Maybe it’s something in the blood…just a thought.

Stephen is already dad to Lilac, 10, and Billy, 12, from a previous relationship. Him and Anna can now count on Sam for advice on managing double diaper duty.

Sam had this to say to the expecting couple:

“It’s harder, having twins, but it’s all we know. So we’re trying to impart some decent wisdom, I told them to hold on tight!”

Hold on tight is right – especially should the kids be privy to their famous parents work set. Stephen has admitted that he loves his kids so much and thinks the fact that Anna is pregnant just adds more crazy to the bundle of fun. Bundle indeed. Well I say congrats to them both, they sure are one of my favorite couples, both on and off screen. Now we just have to wait and see what breed..err, I mean sex the children are.