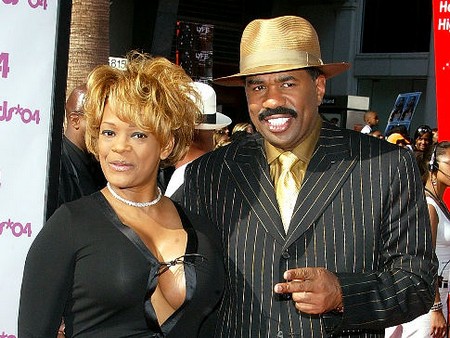 Steve Harvey the comedian turned author is catching a little flack over his book, “Act Like a Lady, Think like a Man.”  Ouch!!  His book was turned into a film and is showing right now.  Now while the film might be funny in a HaHa comedy fashion the actual book leaves a little to be desired.

This book has been called “sexist” and stereotypes men. If you read the book one would been led to believe that all men are “players”.   Now if you keep reading he also writes about women, he’s saying women should dress better and give their men more sex then the men will more than likely stay home – Please!  All this advice from a man, who I might say is on his THIRD marriage.

Mr. Harvey’s ex-wife, Mary Shackelford, with whom he was married to for 10 years, has not been quiet about their past relationship at all. She was on YouTube a little while ago letting it all hang out (I mean” ALL”, talk about bitter WHEW!). She was saying that he cheated on her throughout their marriage. This is only to mention a very small dose of what she was talking about.  Alrighty then maybe number three is a charm.

Getting back to the movie, “Act Like a Lady, Think Like a Man”, in which Mr. Harvey executive produce’s… Critics are saying that this is a typical guys vs. female (us against them) sort of movie. They are saying though because of the actors that are in this movie it makes for a good movie.

I personally have to agree, who would not want to look at that extra fine actor Michael Ealy (Yummy!) and that Kevin Hart knows how to act the fool. So while the book may not be politically correct the movie is a lot of fun. Well I guess the book was good for something.