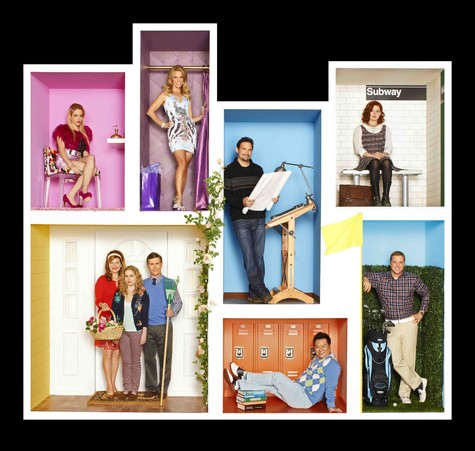 Suburgatory is centered around single parent George Altman (Jeremy Sisto), a New York City single father who found a box of condoms in his teenage daughter Tessa’s (Jane Levy) dresser drawer and decided to move to the suburbs, East Chatswin, to give her a better life – or at least a less precocious one… but is he in for a surprise!  Once the father and daughter team arrive George’s plans go awry. Tessa hates the ‘burbs and the place is not what George thought it would be.  Sex has definitely found its way to East Chatswin and in fact it seems to be something of an epidemic.

Cheryl had this to say about the show, “Because the idea’s that he and his teenage daughter have moved from the city – from Manhattan to the suburbs because he’s looking for some normalcy. And of course there is anything but in the suburbs. And then I played Dallas. I play one of the neighbors. He was hoping that since Tessa his daughter didn’t have mom present  – Tessa  has an absentee mom,  he thought that moving to the suburbs maybe he’d be around some maternal women who could sort of be caretakers for her – for his daughter and guide them maybe. And he does find that. It’s just not what you expect and it certainly is not what he expected.”

The moms in East Chatswin seem to occupy only the extremes of sexuality – either they are overtly sexual and acquisitive about their prospects, like Dallas, or almost puritanical.  George, being a good-looking available man with an eye for women is a natural target.  What’s missing in East Chatswin are women who might realistically serve as role models for Tessa – modern empowered women comfortable with their own sexuality but not utterly possessed by it.

On tonight’s show everyone is preparing for Halloween and trying to come up with a Halloween outfit.  According to Cheryl, Dallas’ costume idea comes to her naturally: “Well Dallas wasn’t sure what to go as for Halloween. And then she said she came home to a dream house with her dream life and realized she’s Barbie. So it’s funny because even when I was trying on clothes for Barbie in wardrobe they weren’t that different from Dallas’s regular wardrobe.  It’s significant actually because she asks George to be her Ken…”  You will have to tune in tonight to find out how George answers Dallas and how the Barbie and Ken concept plays out.

Picking the perfect Halloween costume is not always easy, one year I decided to be a witch and when I stepped into the Halloween party someone stepped on the hem on my dress and let’s just say the dress stayed and I went.  Do you have any funny Halloween costumes stories?  Hit the comments and let us know.

A big issue for Tessa in general, and especially in ‘traditionalist’ East Chatswin, is her commitment to feminism.  Tessa is a totally empowered young woman and she can’t tolerate the dominant female teen ideal she faces amongst the High School crowd. Tessa’s peers and rivals ascribe to a cheerleader as sex-object creed – totally not how the modern urban-raised teen believes young women should be.  In this episode Tessa is forced by her raised consciousness to convince her pals, the Mean Girls, Kimantha, Kaitlyn and Kenzie to come up with feminist costumes.  This is how Tessa comes to the attention of the infamous East Chatswin witch.  We asked Cheryl about this issue.

My question for you today is in the Halloween episode I saw the issue of woman’s empowerment versus their sexual objectification as a major theme. And I wondered if you’re going to explore that further this season?

Cheryl: Well I don’t know if we’ll nail it on the head like in the Halloween episode. But I think it’s always being explored just because, you know, our show creator is a woman, Emily Kapnek and she’s a very smart woman. She also happens to be a mom. And she has a very demanding job and she’s a great mother.

You know, so anytime you’re watching the show and you see the PTA meeting and Dallas is wearing diamonds and, you know, a miniskirt and a halter top and, you know, if you ask 100 people 50 of them would say she looks great and 50 of them would say oh my God what is she doing?  But I think that’s always, you know, in the background the theme or there are different characters on the show that represent different ideas.

So you see the Halloween episode and you say, you might say yes what’s wrong with a woman trying wanting to look good while she’s conquering the world?  So I don’t know. I think it’s a theme that will always be part of our show but not usually so up front and center.

Cheryl: Well I think George is unlike anyone she’s ever met before. And he brings – something real to her life. And she for so long has been concentrating on everything else — money, and looks, and what kind of house you have, and what – how big your cabana is, so to speak. And George isn’t concerned about any of that and it’s refreshing to Dallas. And she is, you know, it’s like looking at good art for the first time in person. It strikes you.

An interesting question asked if Dallas and Tessa will interact in this second season given how diametrically opposed they are on so many issues and their natural competition over George.

Cheryl:  Yes. It gets very interesting because George and Dallas get together. And when they start getting together, you know, the two families start merging. And there’s a bit of a competition with the girls. So it’s hard because Dallas wants to be a good mother to Dalia and also wants to take care of Tessa. But it doesn’t go that smoothly I’ll be honest.

So that wraps it up folks – check out Suburgatory tonight for plenty of sharp humor and lots of social satire!

Tune in tonight  Wednesday October 24th, 2012 at 9:30PM ET on ABC and watch the Halloween-themed episode of Suburgatory entitled, “The Witch of East Chatswin.”  Join us for a Live Twitter “Suburgatory”Viewing Party tonight.

Disclosure:  I participated in this sponsored post campaign for One2One Network. All opinions stated are my own.