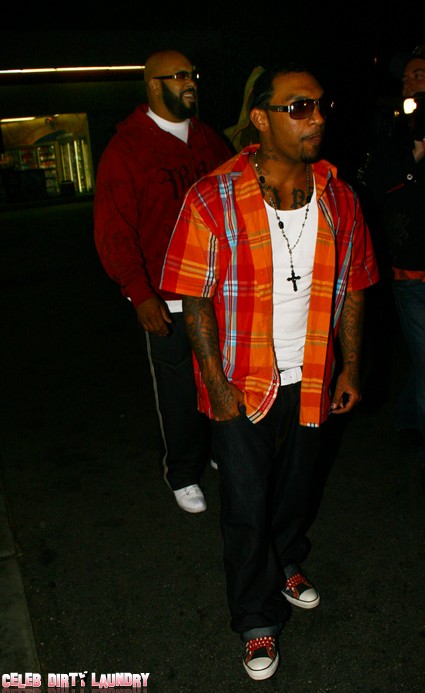 Suge Knight, the man many suspect of arranging the mob-style murder of Biggie Smalls, has been arrested and jailed in Las Vegas. Suge Knight (real name Marion Knight) is suspected of arranging the hit on Biggie (real name Christopher George Latore Wallace), in retaliation for P Diddy’s ( real name Sean ‘Puffy’ Combs) suspected involvement in the murder of Tupac Shakur. Suge Knight has a long and violent criminal record and has spent years in jail.

The Death Row Records founder was arrested after he was pulled over by police for committing a minor traffic offense. However, he had three outstanding traffic warrants to his name and police also found just under an ounce of marijuana in his possession.

Police jailed the former hip-hop mogul for a short period, before releasing him on $2,600 bail, according to Reuters news agency. Suge Knight became notorious in the hip-hop world in the 1990s, for the part that he played in launching the careers of Snoop Dogg – who himself was recently arrested for possession of marijuana – and Tupac Shakur. The initial offence that he was pulled over for involved turning without making a proper signal.

It’s not the first time recently that Suge Knight has been in trouble with the law. He was arrested in Las Vegas in 2008 on drug and assault charges. He had been accused of assaulting his girlfriend outside a strip club and threatening her with a knife. In 2009 he sought treatment for facial injuries that he sustained in a fight at a hotel in Scottsdale, Arizona. Then, in May 2010, Knight was arrested once more, on suspicion of assault with a deadly weapon.

In 2006 nine years after the “Biggie Smalls” murder, LAPD formed a task force to finally solve the case. According to its principle investigator, LAPD officer Greg Kading, Duane “Keefe D” Davis, a member of the “Crips” street gang, confessed to riding in the car involved in the Las Vegas drive-by shooting of Tupac Shakur.

Keefe D claimed they had been offered “a million dollars” by Puffy Combs, now known as P Diddy, for the killing of his rivals, Tupac and Suge Knight. While in Las Vegas he and a group of fellow Crips accidentally crossed paths with a limousine carrying both Knight and Shakur. The fatal shots were fired by Orlondo “Baby Lane” Anderson because he was on the side of the car closest to limousine.

Despite the task force’s findings, charges were never brought and the task force was wound down and disbanded for reasons of “internal affairs.” — this is from — Murder Rap: The Untold Story of the Biggie Smalls & Tupac Shakur Murder Investigations by the Detective Who Solved Both Cases, Greg Kading, One Time Publishing, 2011.

They should have kept Suge in jail. There is every reason to believe that he and P Diddy are guilty of murder.