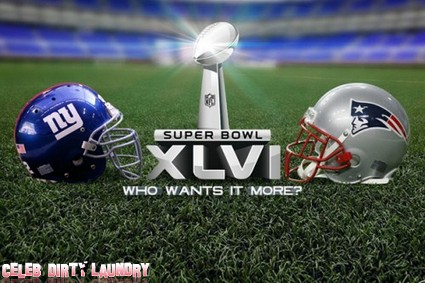 To honor America – Kelly Clarkson! Yes she is singing the American National anthem. She has a choir of children and a marching band backing her up… In all honesty, this is not as bad as I thought it was gonna be. One thing though… what the hell is up with Clarkson’s hair? Why try to look like a mutt on purpose?  See the video of her singing at the Super Bowl HERE!

We go to the coin toss… where the new members of the Pro Football Hall of Fame are announced. Ref John Perry is doing to the coin toss with a special commemorative coin. New York is considered the visiting team, and so they chose tails. It’s heads so New England elect to let the Ginats receive.

Michelle Tafoya brings up the Gronkowski topic – how healthy is he going to be in this game? According to Michelle, Gronkowski himself said he should have his game affected. The Patriots TE got injured the AFC championship game, and was seen limping since. Lucky him, he had 2 weeks to relax and heal.

Kick-off just happened at 6:30 EST. So it’s Giants ball from the 23. Victor Cruz gets the 1st after a nice pass by Manning. Giants with another 1st and their running game seems to be as sharp as ever. Hakeem Nicks now with a big catch for a gain of 19. Manning now sacked for the first time tonight. Manning now double teamed for another sack by Anderson and the Giants punt it away.

On comes Brady for the 1st time tonight, and he will start at his own 6 yard line. Brady now throws to nobody, and because he’s in his own end zone he gets called for a safety, 2-0 Giants. How about that for a start? Romanian Zoltan Meszko with the beauty punt. Bradshaw gets 24 yards… once again on the run. The giants running game is slicing like a hot knife right now. Giants now at the Pats 15 after a gain of 3 on the run. Giants getting close to the end zone – 3rd and 3.

READ REST OF THE PLAY-BY-PLAY HERE