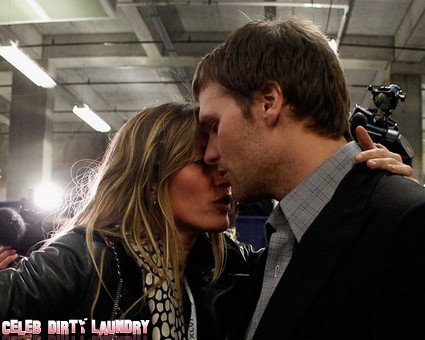 Losing the Super Bowl must be heartbreaking but there is an upside when you’re New England Patriot Tom Brady – you have Gisele Bundchen to console you! The Brazilian supermodel was there to offer the quarterback a shoulder to cry on after his team were unable to beat the New York Giants in Indianapolis on Sunday. The final score 21-17.

Understandably Tom was shattered after the loss ‘You know, we fought to the end. You know, we’re very proud of that. Just came up a little bit short’. Gisele was watching the drama unfold in the stands. As soon as she could be with her husband she gave him a hug. They managed to hook up when he stepped out of the locker room on the way to face the press.  I’m sure a hug from Gisele would make any man feel better! Even if she did look very disappointed after the  game.

The 34 year old was hoping to add another Super Bowl title to his collection. He nearly did. He got the ball back with a minute left on the clock. So could he have led his team to that all important winning touchdown? ‘Yeah, we tried, you know… We just, we got to the fifty and kind of ran out of time and threw a hail mary at the end. I don’t know how close we were to getting it…‘

But Tom was gracious in defeat ‘As a competitor, we all hate to lose. We fight as hard as we can and sometimes you get beat. I’m proud of our team for the way that we hung in there all season. We just kept fighting until the end and it came down to one play at the end of the game. … I give (the Giants) a lot of credit for the plays they made. They deserved to win and hopefully we’ll be back at some point. In the meantime don’t feel too bad for Tom – he kinda won the Super Bowl of supermodels with Gisele!