Suri Cruise Forced To Crawl To School Through A Cardboard Tunnel 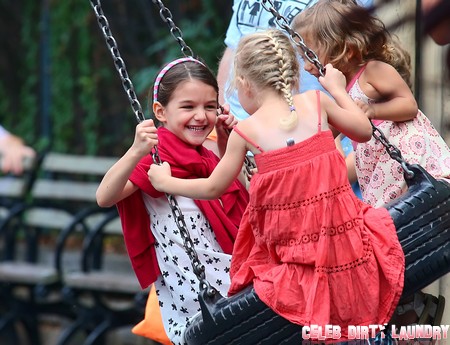 In the most melodramatic act since Teen Mom’s finale, we just got news that Suri Cruise crawls to school through a cardboard tunnel. Sources state that Suri’s $40 000 per annum school erected a cardboard tunnel to protect her “privacy” from the prying lenses of photographers.

This might be an ingenious way for a normal mother to protect her kid from the patchy-faced serial killers out there, but keeping the paparazzi at bay for Suri might be taking it a tad bit too far. Excuse us if we’re ignorant, but how does it work? Do Katie Holmes and Suri pitch up at school in an inconspicuous limousine and crawl to Art class on their knees? Does Katie scream “Get down Suri!” when they exit the pimped up limo? We know our darling doe-eyed Katie has always had a penchant for being overly dramatic, but Suri isn’t Criss Angel, nor is she playing E.T. with paparazzi fingers. She’s only trying to get to school!

Katie, why don’t you make the kid feel normal for once? Why not offer the paparazzi tickets to a Scientology convention? Why not take Suri inside with your hand wrapped around hers, like any normal mother would do? What if the other kids bully Suri for her make-shift fantasy tunnel straight out of a science-fiction film? You wouldn’t be able to save her, nor would you be able to put her in a bubble. You have to offer her a sense of normalcy, especially after the vicious divorce proceedings between you and Tom Cruise.

We really hope Justin Bieber doesn’t see this as a way to “outwit” the paparazzi, because there won’t be any light at the end of that tunnel… Let us know in the comments below your thoughts on this outrageous celebrity parenting method. Isn’t it just too bizarre?