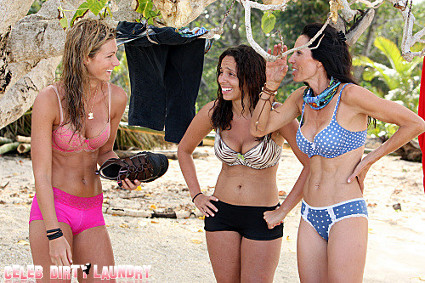 Survivor: One World is about to make its premiere and people are already talking about what potential dramas this season’s changes will add to the show. This season it will be men versus the ladies. Now, while they have used a similar boy vs. girl structure in past seasons, this season throws a new twist at the competing tribes: they all will live on one beach. OMG, can you say trouble in paradise?

The fact that all competitors will exist on one beach may seem like no big deal, but it is, as it will make possible connections/alliances/trusts to be formed between opposing teams long before any official mergers take place. Sounds exciting, right? Without further ado, let’s meet the ladies of the Salani Tribe.

Pictured above (left to right): Chelsea, Alicia, and Monica

1. Chelsea Meissner (26) is from Charleston, SC and a medical sales rep. She was a state champion equestrian rider and is on survivor because she hasn’t seen “any country girls who have a strong redneck side that are strong competitors.”

Jeff Probst says of Chelsea: “Chelsea was born to play Survivor. She is everything we look for in a female contestant — smart, attractive, physically fit, comfortable hunting and fishing.  And I think she could dominate this game and run that women’s camp, and help build shelter and catch fish and find chickens and be a real threat. I hope she lasts a long time.”

2. Nina Acosta (51) is a native Californian and is a retired LAPD officer. She says she’s on Survivor because she wants to prove that a 50+ year old woman has what it takes to compete.

3. Christina Cha (29) is from Hollywood, CA and is a career consultant.

Jeff Probst says of Christina: “Christina’s not going to be intimidated by the men or the women. If she gets in with the right group of women, they could form an alliance that would be pretty tough. If she ends up on the outside of any women, she’s going to be in trouble.”

4. Monica Culpepper (41) is from Florida and is an Ex-Football wife. She was once married to Brad Culpepper. Her reason for being on the show: “I gave up my medical school and career dreams when I met my husband in college and have devoted the rest of my time to my family as a mother and a supportive spouse. It is my time to “step out” and see what grit I am made of… I’m ready to show I’m a Survivor!”

5. Kat Edorsson (22) is from Florida and is a timeshare representative.

Jeff Probst says of Kat:  “Kat also needs to be quiet. She’s going to say something regrettable that will get her in hot water. She’s likeable, she’s fit, she’s cute and she can work the guys. It just depends what kind of start she gets off to.”

6. Kourtney Moon (29) is from Austin, TX and is works in the motorcycle repair industry. Her reasons for being on the show are blunt:  “I need the money and want the experience. Traveling, meeting new people, opening new doors, getting the hell out of the Austin bubble for a little while… I severely need a drastic change in my life, preferably one that won’t kill me. I think I’m going to walk away from this permanently changed… but for the better.”

Jeff Probst says she won’t be able to win because she doesn’t have a strong enough personality.

7. Alicia Rosa (25) is a special-education teacher from Chicago. Jeff Probst doesn’t have anything particularly kind to say about Alicia: “Alicia is the true fish out of the water in this game. She doesn’t hesitate to dress down to underwear and walk over and try to get something from the guys. She’s got a smart-ass sense of humor, and she’s not afraid to flirt. I don’t think there’s any chance of her winning this game.”

8. Kim Spradlin (29) is from Texas and owns a bridal shop. She says she’s always up for an adventure and she’s on Survivor simply “for the thrill of it!” Jeff Probst says: “Kimberly is another favorite to win. If she can get to the end, she’ll win the money. She’s likeable and smart enough to stay out of the way.”

9. Sabrina Thompson (33) is a high school teacher and also the co-founder of the extremely succesful non-profit organization, WEEN. She says she’s on the show because of “The challenge.” She says, “Many things come easily to me so i want to see if this will be the ultimate challenge.”

Jeff Probst says of Sabrina:  “She’s going to do well in challenges. She’s got a great spirit of encouraging others to do well, and I really hope she does last. The only thing that’s going to bite Sabrina in the butt is choosing the right alliance.”

Well, there are your lady competitors, folks! The Salani (not salami) Tribe seems to be really strong this year, and we’re excited to see what types of alliances will form. Check back later today for profiles of all the men competing on the Manono Tribe!

Are you excited for Survivor: One World? Leave us your thoughts in the comments section below!