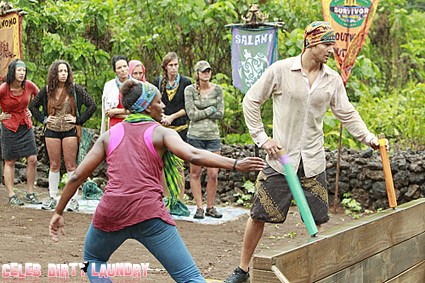 Survivor: One World airs tonight on CBS and it is called ‘One World Is Out The Window.’  Stay tuned as we live blogging the episode with all the up-to-the-minute details.  I wonder if the name means that they are going to join the women with the men or mix the teams up.  The point of survivor is suppose to be the castaways “outwit, outlast and outplay” to become the Ultimate Survivor – but this season the women’s team are nitwits who cannot outlast or out outplay anything.

On last week’s episode Nina was sent home in another dumb, dumb move by the women.   The men are going to pick them off one by one.   Jeff told them they have to get it together – NO JOKE!

On tonight’s episode weathering the harsh elements sparks new battles between the sexes, and poor communication leaves castaways scrambling at a frustration-filled Immunity Challenge.  The challenge is  the tried and true classic Survivor “blindfold” challenge, where a person usually shouts out directions to their blindfolded tribe mate.

Can you imagine how bad the women probably do?  I can just see Kat messing up really bad.  Last week on an easy challenge she could not understand it and kept jumping in the water.  The ladies really need to win tonight but I don’t have much confidence they will.  What do you think of the women so far?  Hit the comments CDLers and let us know!

TONIGHT’S RECAP:  The weather is getting really bad and the wind is blowing right through the women’s shelter and the women are freezing.  Sabrina feels like the whole shelter is about to blow down.  The men are luckier because they have a tarp to protect them that they won last week in the challenge.

At Salani everything is wet  – Chelsea says the ladies did not get any sleep last night and the rain put the fire out so they have not eaten either.  The ladies call the men and asks if they have fire.  The men tell them that they did not get wet and offer the ladies to go to their fire and warm up.

Matt got back from crab hunting and found the ladies there and he is not impressed that the ladies are there.

The contestants head to the reward challenge.  One at a time tribe members will face off for a memory test.   The survivors will look at a picture of items and then they will have to go and recreate what they saw.  The winning team will win a complete fishing kit and a canoe.  The ladies are kicking butt in the competition.  The winning team has to win five rounds to win and the ladies have already won 3.  The ladies win the reward challenge!

The ladies are excited because they won their first challenge and they feel it is just what they need to pick up the tribe.  The ladies are trying to fi up their shelter to keep warm.  There is a horrible storm going on.

The ladies go to ask the men if they will help and give them some dry coconuts to help them out – all their coconuts are wet and they cannot make a fire.  Some of the men are pissed because they think the women should give them something since they keep helping them out.  Two ladies come back over to the men’s team to warm out.  The men ask if they can take their boat out for one day and the 2 ladies refuse to say yes and the men are pissed.  The men tell the two women to go back to the women and get an answer.  Even Colton does not not answer.

The ladies talk about the men wanting to use canoe, they are not pleased about it.  Did I mention these women are stupid?  They want the men to give them fire and warmth and and.. and they think they have to give nothing in return!

The ladies are out in the canoe – the sun came up when they woke up.   The ladies went out and caught a couple of fish.  The ladies are starting to feel different.  The men can see the women are getting more confident.

Immunity Challenge:  Once again immunity is up for grabs.  One person is the called and the other castaways are blindfolded.  The called will direct the people of their team to getting bags of puzzle pieces.  Then the caller will put the puzzle together.  Bill is the caller for the men and Sabrina for the women.  The men are leading right from the beginning.  The ladies are way behind.  The men get all the bags and are starting to do their puzzle and the women only have 3 out of 5 bags.

The men have a lot if time and they do not have to panic.  The women are finally back – the puzzle is very difficult.  Sabrina has brought the women back and they are tied with the men.  They were down to one piece each but the women found the last piece and the women win immunity.  A huge comeback victory for them.  The ladies are heading back to camp to celebrate.

The men get back to the camp and the men congratulate Bill because they said he did a good job.  On the other hand Colton think it was Bill’s fault they lost.  Colton cannot stand Bill he thinks he is ghetto trash and that he wants him gone ASAP.  There are 2 sides on the team or 2 alliances.  Colton wants Bill to go home but his alliance wants Matt to go first.  Troyzon thinks Matt is the biggest threat.   Colton’s alliance asks Jay to join them and he agrees because he knows that they have the numbers.

Matt comes over and asks what they are talking about and Troyzon is honest and tells him they are talking strategy.    Matt leaves and later takes Troy aside – he lets him know it is convenient to get rid of the muscle but that is not the way to do it.  Matt starts telling Troy that the strong guys are Roosters and the others are chickens.  He tries to get Troy to go in an alliance with him.  Troy goes back to his existing alliance and tells them what Matt wants.  Troy thinks Matt is dangerous and he should go first.

Tribal Council:  Matt is confident – Bill is excited he says he has not idea what is going to happen tonight.  Colton is confident because he knows he is not going because he has an immunity idol the ladies gave him.  At the end Colton decides not to use his idol.

The votes are tallied and MATT is voted off!