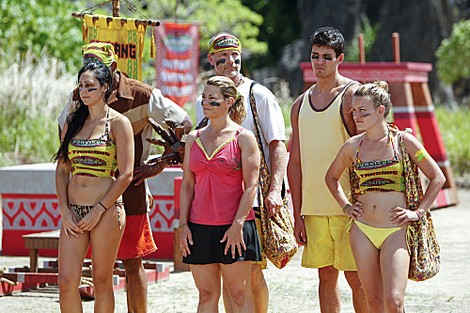 Tonight on CBS Survivor Philippines airs with a whole new episode called “Don’t Be Blinded By The Headlights.”  On tonight’s show Former TV teen star Lisa Whelchel reaches her breaking point early in the game.  If you missed last week’s episode we have a full and detailed recap for you here!

Survivor changed the way we watch television back in 2001 when Richard Hatch became the winner of $1 million and the title of Ultimate Survivor. We experienced 25 of the most memorable seasons in US TV history, as the show delivered up winner after winner, blindside after blindside and some of the most conniving bitches since the Kardashians.

Survivor: Philippines premiered last week with some of the highest audience ratings in quite a few years. The tribe was ready to speak and Jeff Probst was perched upon his unbiased pedestal of Tribal Council chatter. We were introduced to the newbies and the three returning castaways (a production “secret” which wasn’t really so secret!) in the usual D-Day World War 3 season opening arrival. The 28-year-old Zane Knight from the Matsing tribe became the first victim of the season and was voted off during last week’s Tribal Council with a total of 5 votes against him. Celeb Dirty Laundry will be covering the second episode of Survivor tonight during a live recap of the episode.

On tonight’s show we’re expecting more Outwit, Outplay and Outlast with the cast of the 25th season. Jeff Kent will continue to struggle with his knee injury, a heavy object/puzzle challenge will push the Survivors to their maximum capacity and Lisa Welchel will be further ostracized by her tribe. Bookmark this page, go make yourself din-din, get some popcorn and come chill with us while we watch the god of reality television embark on another exciting jungle adventure!

Tonight’s episode is going to be filled with the usual drama, which you won’t want to miss. So be sure to tune in for our live coverage of CBS’s Survivor Philippines – tonight at 8PM EST!  While you wait for our recap, hit the comments and let us know what you thought of last week’s premiere?

Tonight’s episode:  There are 17 survivors left, who will be voted out tonight? We will find out soon. Russell knew his head was on the chopping block last week and he almost got himself voted out; his new strategy is to stand back in the distance.

Angie cuddles with Malcolm at night because she is freezing but she swears there is nothing going on. Meanwhile, Roxy thinks they are hooking up and its going to put a target on their backs.

At the Tandang tribe RC finds the rice is getting mouldy and she found something inside, a clue to the immunity idol. Meanwhile, Abi-Maria thinks RC is getting too close to Michael and is worried about their alliance even though RC told her that she found the clue.

Jeff is having problems with his knee and really happy that they are getting rain so he can rest it. Jonathan wants to find the idol, but the rain is keeping everyone together and its driving him crazy. Finally the camp is empty, everyone was concerned about the rain and left Jonathan alone, so he is searching the whole camp site for the immunity idol. Jonathan finally figures out where the immunity idol clue is, on top of the rice box.

Roxy wants Angie out, she is tired of the cuddling and tries to get Russell on her side first, then she does the rounds with the rest of the tribe to turn them against them. Matsing tribe seems to have the

At Tandang the tribe is talking about food and Lisa isn’t saying much because she doesn’t do too well with the chit chat. Abi-Maria thinks Lisa is an outsider and not trying to connect with anyone in the tribe, unfortunately Lisa already has a target on her back. Meanwhile Lisa feels that she is not fitting in and is very upset about it and questioning if she is even made to play this game.

At Matsing, no fire is deadly and the tribe is beginning to get miserable. Malcolm doesn’t think he has ever been so wet in his life. Roxy is driven to tears, even her faith is not strength enough for the cold and wet weather. Russell and Denise are getting nervous about Roxy who is chanting some biblical prayer to help her in the game.

At the immunity challenge, 2 members from each tribe have to carry a sled to collect three sets of puzzle pieces, once all the pieces are collected the puzzle have to be made. The tribe that finishes their puzzle first will win reward; blankets, pillows and a rope. The second tribe will win a tarp and rope.

Tandang is in the lead with Matsing closely and surprisingly behind them. Tandang finishes first, wins reward and immunity. Kalabaw finishes second and wins immunity and a smaller reward. Unfortunately, Matsing is heading to Tribal Council again where on tribe member will be heading home.

Russell loses it and tells Jeff that he is pissed off with his tribe, specifically with the “I can’t do it” attitude.

Back at camp, Russell is still upset with Roxy and Angie for not giving 100 percent at the challenge. Roxy is still black listing Angie, she wants her out. Malcolm tells Angie that Roxy is trying to get her out. Meanwhile, Malcolm knows he should’t be cuddling with Angie, but he can’t help himself. Russell approaches Denise to get rid of Angie, but she doesn’t like Roxy because there is just something about Roxy that bugs her.

At Tribal Council, Russell tells Jeff that he is intense about this game. Roxy tells Jeff that her fellow tribe mates put too much effort in at camp and she doesn’t like it. Meanwhile, Angie would love to have cookies more than anything. Roxy goes on to tell Jeff that Malcolm and Angie have much more going on than an alliance. Malcolm denies it, he claims that he is just sleeping near Angie because they are both cold. Roxy goes on to call Angie a “boobie trap”, meaning it literally. Jeff tells Roxy to wake up, she and Malcolm are under suspicion and that is a huge target.