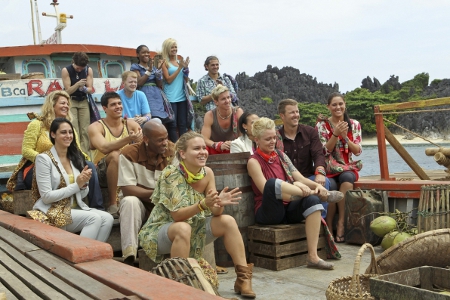 Survivor Philippines starts tonight, and we’re definitely ready for some crazy, insane, out-of-this-world island drama! On this season, which just so happens to be the Emmy-Award winning show’s 25th installment, contestants will be pitted against one another to see who’s the strongest and who — as the show’s apt motto suggests — will be able to outwit, outplay, and, perhaps most importantly, outlast their fellow competition. This season will welcome fifteen castaways, as well as reintroduce three returning contestant — all of whom were forced to withdraw from the competition on account of medical issues. So, will those individuals fare better luck this go around? We’ll see.

For the first time in a long while, the show will divide the 18 contestants up into three distinct groups, each of which bears the name of an animal distinct to the region: Kalabaw (“Water Buffalo”), Tandang (“Rooster”) and Matsing (“Monkey”). It is expected that this season will bring marine-based challenges to the forefront and, as always, demand the utmost physical endurance and stamina from each contestant. Survivor ain’t no easy game, folks!

As always, there’s bound to be drama and personalities will definitely clash. Don’t they always? We’re interested to see how this three team situation will work out and how, if any, special merges and alliances occur that will, ultimately, influence the play of the game. So who will win this season of Survivor? Of course we don’t know that yet, but our bets are on the 41-year-old sex therapist from the Matsing tribe. Why, you ask? Well, because wouldn’t it just be awesome if a sex therapist one?

As reported by Entertainment Weekly, the three returning players will be the following individuals: Michael Skupin, Jonathan Penner, and Russell Swan. Each one of those individuals will bring their past (and losing) experience to a team and try their hardest to prove that, if they’d been allowed to continue in the competition, they would’ve been a force to be reckoned with. We’re quite excited to see what dynamic this subtle element adds to the playing field. They have a taste of what Survivor is like, and no doubt they’re coming back to the game with sharpened claws and hungry bellies, ready to outlast and outplay everyone.

Here’s a list of the following competitors as well as what team they’re on (for now: we all know how volatile these alliances, allegiances, and team factions can be on this show full of island awesomeness and jungle-jungle epicness):

Survivor Philippines season 25 airs tonight, Wednesday, September 19 @ 8/7c on CBS for a special 90-minute edition. Jeff Probst returns as the all-star host. Don’t forget to check it out so you can meet all the castaways, choose your favorite team, get invested in all the drama while it’s still fresh and hot, and cast your vote for the winning player! Don’t be shy in the comments below: Let us know your thoughts on this upcoming season.