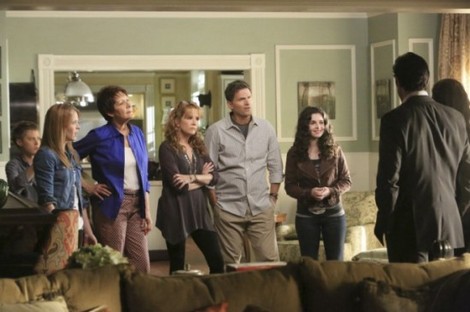 Tonight is an all new episode of ABC’s Award Winning series Switched At Birth. On tonight’s show called ‘The Intruder’ Regina’s impulsive decision to marry has major consequences for the Vasquez and Kennish households.  If you missed last week’s episode called “This Is The Color Of My Dreams” you can find out full and detailed recap here!

On last week’s show Bay returned from her summer trip with a new boyfriend. Kathryn juggled her duties as a wife and mom with her new career as an author. Daphne got a new job. The kids returned to school.

On tonight’s show Regina and Angelo faces repercussions from their marriage, Meanwhile, Bay meets a fellow street artist; Daphne and Emmett enter their Zombie movie in a film festival; and John’s baseball record is in jeopardy of being broken.

Regina and Angelo meet with Immigration but it doesn’t go well, while Bay meets another street artist.  This season, the families must deal with the arrival of Bay’s biological father Angelo (Gilles Marini), inflaming old passions and creating new rivalries. During their lawsuit with the hospital, the Kennishes find an unlikely ally in Angelo. But can he be trusted?

Tonight’s episode begins with an entire family bombshell. Regina tells everyone together that she and Angelo got married, on paper. Bay looks pretty darn happy about the situation considering it means that her biological mom and dad will be together and Angelo now gets to stay in the country.  Now Regina just has to figure out how to tell Patrick, her boyfriend, that she’s married to someone else and that conversation goes very badly. He doesn’t know how to date a woman that is technically on her honeymoon.

Kathryn is furious that Regina is taking marriage so lightly just to keep Angelo from being deported. She thinks Bay is better off without his influence.

Daphne is back to working in the kitchen and she wants to pitch a few ideas to her boss. It’s suggested that she keep her mouth shut and understand that she’ll be promoted for the job that she does not what she wants to do.

Regina and Angelo meet with immigration and are separated and asked the same questions in order to prove that they are a real couple. They both tell the same story of how they got engaged and it looks like they’re not on the same page. Angelo seems truly invested in the marriage while Regina is not at all there emotionally. The INS agent said that due to red flags in their relationship their case will be referred to the fraud department so that further verifications can be made. Basically they want proof that this couple is living together.

Daphne approaches Bay about inviting Emmett over to help her with computer work. The idea was to get the busted up couple together but it backfires as Bay says that it’s cool because she’ll be out anyway.

Regina and Angelo tell Kathryn and John that they need to live together to look like a real married couple and a huge fight ensues because the last thing Kathryn wants is to have Angelo under her roof.  The whole family is fighting and Bay keeps trying to keep Daphne updated on what is being said. She can’t read lips nearly as fast as they’re all speaking. Finally Daphne interrupts them all and tells them Angelo is moving into the guest house, end of story and for some reason, everyone listens.

Emmett does come to the house to help Daphne with her video and Bay is not the issue. Instead it is Toby that comes home and knocks Emmett on his butt for even setting foot in the house.

Daphne heads out to work at the restaurant and accidentally breaks a whole batch of dinner plates. While having a mini breakdown the chef finally softens towards her. He introduces himself as ‘Jeff’ and starts gently asking if she’s okay and what he can do to try and help. She tells him home is the last place she wants to be and he suggests breaking some dishes there.

Daphne later confesses to Bay that she’s just not really okay with Angelo moving in and it looks like the girls are going to completely bond on this point. Daphne does eventually talk to Regina and she decides that Angelo can stay with them.She doesn’t want to stand in Bay’s way of knowing her real dad. Tune in next week to find out how this new living situation works out!