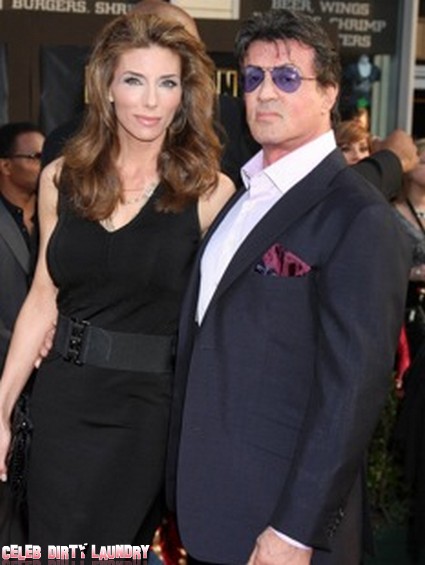 Now that they’ve bled Taylor Armstrong dry and Camille Grammer has gotten way too boring and sad, the producers of Bravo’s Real Housewives of Beverly Hills are rumored to be looking for some fresh meat to join the cast of the popular show. RadarOnline is reporting today that action star Sylvester Stallone’s wife Jennifer Flavin may be next in line to cat fight her way through 24 episodes of weave pulling drama.

Producers of the popular reality show seem to think that Flavin, 43, has what it takes to bring the stuff viewers love—pure, unadulterated bitchiness under a thin veneer of a classy woman in her sexual prime. “Jennifer would be great on the show, she’s married to a super famous guy and she’s friends with a few of the women on the show,” a source told RadarOnline. “She has her own business and she’s really successful all on her own. Plus she’s got a great personality for reality TV.”

A former model and creator of Serious Skin Care, Flavin has three children with 65-year-old Stallone, whom she married in 1997. The couple shares a huge mansion in Beverly Hills, conveniently located in the same neighborhood as current housewife Adrienne Maloof.

If she decided to join the cast of RHOBH, this wouldn’t be Flavin’s first time on reality TV. She competed on reality style shows Gladiator and The Contender with her husband in the past.

However, there may be one problem standing in the way of Flavin becoming a housewife—her famous husband. “Her friends don’t think that Sly would ever let her be on the show,” the source said. “They don’t think he would ever want her to do it, but he might if she really wants to.”

As if TV hasn’t inflicted enough pain on my retinas with Bruce Jenner. The thought of watching Sylvester Stallone coat himself in oil before chilling by the pool in a banana hammock is enough to send me back to PBS.