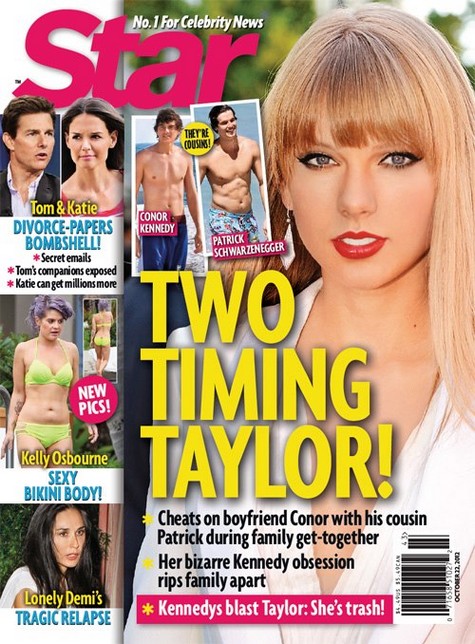 I’ll see you a Kennedy and I’ll raise you a Schwarzenegger! I like this game! Who would have thought that Taylor Swift cheats? She always likes to play the victim, calling out her wandering boyfriends (cough, cough John Mayer) in every other song. So has Taylor taken what she’s learned and spread it around the Kennedy compound?

Definitely – if you believe Star magazine – which not many people do but we’ll go with it anyway. Apparently Taylor hooked up with both her boyfriend Conor Kennedy, and his cousin, Patrick Schwarzenegger at a family event within hours of each other. What would Jackie Kennedy Onassis think? Radar Online reports:

“Taylor was making out with Patrick all night,” a source told Star about the party. Taylor’s rep denies the claim. “The previous day, she was all over Conor, so she hooked up with two cousins on consecutive nights! Taylor and Patrick weren’t kissing out in the open, but she wasn’t being as subtle as she thought she was. Conor doesn’t know, but everyone else in the family does. They think she’s a hanger-on and find her obsession with the Kennedy cousins disconcerting. Taylor lost the respect of everyone in the family. They despise her and don’t want her anywhere near Conor or Patrick.”

So can we assume Conor knows now? And can we assume this is why Taylor reportedly tried to go out to dinner with one of the kids from One Direction while in London over the weekend? Perez Hilton said the dinner date got canceled and Taylor abruptly left Radio 1’s Teen Awards on a plane instead. Are you sensing trouble in paradise?

Really, it was only a matter of time before Taylor shifted to Patrick although everyone thought she was dating him before Conor came in the picture because she was always seen hanging out with him at the Kennedy compound. Then I thought I heard she was using him as a decoy so the press didn’t pick up on her relationship with Conor but Patrick must have got the messages crossed. Or maybe Patrick didn’t fall far from the tree and sensed his inner Arnold and went in for the kill. Why let a perfectly good make-out session with a famous pop star fall out of your grasp? I got to tell you. If I were Taylor I’d be all over Patrick. Nothing about him or his genetics screams boyfriend material but he’s gorgeous and always looks like he’s having a good time. He’s a much better looking version of his dad and you can actually understand him without giggling. I sense some douche in him but he’s young so it’s expected. He’d make for a good summer fling. Apparently Taylor thought so too but did it cost her the Kennedy connection?

Do you believe Taylor would cheat? I try not to take gossip too seriously but if Taylor screws this kid after the year he’s had we might have to break up.