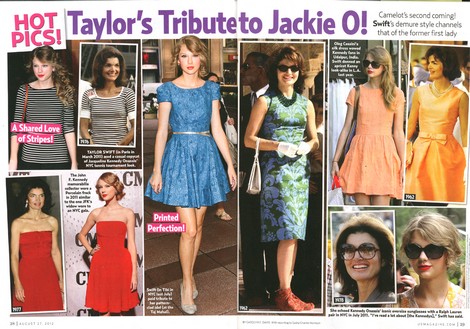 Taylor Swift has less talent than a crying cupcake, but she still seems to attract magazine headlines to her like a zombie attracts flies. According to Us Weekly, as reported on Jezebel.com, Taylor Swift is slowly morphing into Jackie Kennedy. No, this is not the plot for a new horror film called “Jackie O’s Vampires”.

There are several pictures in Us Weekly where Taylor is seen emulating Jackie O. She not only wears almost the exact same dresses, but she also poses like Jackie, in a macabre copy-cat manner. In 2011, Taylor was seen donning the iconic Jackie sunglasses in New York. She also mentioned recently that she’s “read a lot about Jackie Kennedy”. This would be all fine and dandy, if Taylor wasn’t dating one of the Kennedy kids! She has been spotted with Conor Kennedy, the grandson of Robert F. Kennedy, and also bought a mansion next to his mansion so they could share mansions like Ken and Barbie.

We know Taylor’s house has been entered by more men than a popular bordello in Holland and that her rocky relationships have been captured in her second grade lyrics, but hunting a Kennedy for his name is the same as cheating on an IQ test – you’re still stupid, whether your IQ is more than Einstein or not.

Hey, who knows, maybe one day Taylor will be able to grow up and stop clinging to men in order to write “lyrics”. She might be loved by billions of pre-teens, but popularity has never been a rule of thumb for talent, so Taylor, why don’t you get rid of the Jackie O dress-up party and become a real singer for once?

Let us know in the comments below what you think of Taylor Swift’s obsession with Jackie Kennedy. Is it weird that she’s dating a Kennedy kid and is still obsessing over Jackie?