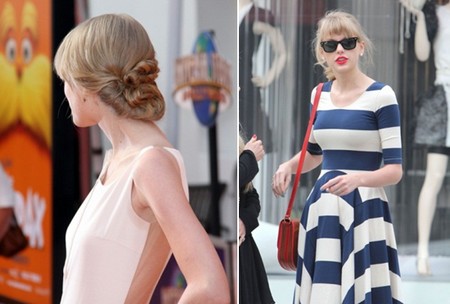 Taylor Swift wanted a makeover and so she appears to have gone out and bought herself some new and larger breasts.  Cosmetic surgery for Hollywood celebs is like brushing our teeth for the rest of us – they don’t leave home without it.  In any case, if Taylor wants more bust then Taylor has the right to buy more bust – and if the photos tell us the story then Taylor definitely wants more bust!

Photogs recently caught up with the hot singer while she out shopping with a friend in Beverly Hills, California.   Taylor was wearing a blue striped dress that forced us to take a second look because it seems that Taylor might have gotten herself some new boobies.  Either that or she is wearing a great push-up bra – but that doesn’t appear to be the case.  The story was first reported by Hollywood Hiccups.

Olivia Newton-John who is famed for playing Sandy in 1978?s musical Grease has named Taylor Swift as her choice to star in a Grease remake should one be made.  Could this have been Taylor’s motivation to improve her bust?  Do you see Taylor playing Sandy – she sure can sing the part anyway.  Let us know in the comments below.

Check out the photos above of Taylor last week (right) and Taylor (left)at the DR. Seuss’ The Lorax Premiere.  Do you think that Taylor got breast implants with plastic surgery or has she just bought herself an amazing bra?  Hit the comments and let us know your thoughts!