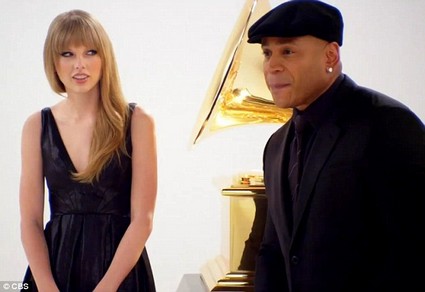 During the making of a promotional video for the Grammy’s with LL Cool J, Taylor Swift, no stranger to Grammy awards, attempted to beatbox and as a beatboxer, I can tell you that its incredibly hard too actually even be considered good.

So no surprise that Taylor Swift wasn’t good and the two just started laughing which put the whole thing to a stop. It takes a lot of practice for females to be good at beatboxing and there are very few of them doing it professionally.

I wasn’t aware that LL Cool J was going to host the Grammy’s, I never even expected it. I hope he does well, because he’s a rapper that I really like. But Taylor Swift is a different story; I really don’t like her music at all. All her songs have similar concepts and it just makes me easily bored, I only enjoy artists who can be diverse in what they sing and rap; she can’t do either.

The promo below is one of several funny Grammy spots starring Swift and LL Cool J.  Swift will be one of the performers on the show and is up for three awards, including Country Album of the Year.

The 54th Annual Grammy Awards will be televised on CBS live from Los Angeles’s Staples Center, Feburary 12th, at 8 p.m.