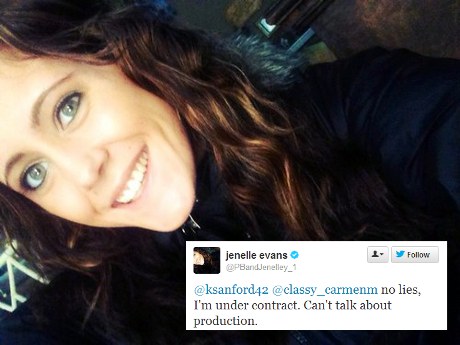 News surrounding Jenelle Evans, Teen Mom 2 star, never ends — and just recently she’s admitted to the fact that she, at one time, suffered from a particularly awful heroin addiction. There’s no denying the teen mom has battled with other drugs (such as weed) in the past, but has she struggled with heroin, too? It appears so, and her husband, Courtland Rogers, made a rather bold move on Twitter earlier in an irrational tweet sent to Keiffer Delp, her ex.

The Twittersphere is the primary stage for Teen Mom stars and, frequently, they get themselves into loads of trouble in 140 characters or less. You’d think they’d learn by now. But, I’m starting to think they like the attention *snicker* *hehe*. No duh.

Courtland said to Kieffer, “just leave me and my WIFE .. Mrs. Rogers alone go about ur herion based life it’s funny people think I am a junkie wait till thy see this next season on how u did jenelle and got her hooked on herion u stupid duck she almost died cuz of u dumba**.”

Yes, you read that correctly, folks. He called Kieffer one of the most offensive names in the entire universe. He called him a “Duck.” I’m pretty sure he intended to call him another choice word, but we rather enjoy his misspelling. C’mon, we gotta give the dude a break. The “i” and “u” are SO incredibly close — right next to each other, actually — on the computer keyboard. We’ll cut him some slack — this time.

The amazing and eloquent Courtland added another statement to his allegations. “u got jenelle strung out and then bailed on her when she needed u most! And everyone thinks u are the good guy! This is sad.”

Now, don’t think Jenelle just sat back and watched all this crap go down. While she didn’t say much, she definitely threw her tweet out into the universe. We all know she loves to be heard, especially in 140 characters or less. When a couple viewers reacted to the allegations and chit chat regarding Jenelle’s rather heavy drug use, she responded with the following: “no lies, I’m under contract. Can’t talk about production.”

It’s not a direct confession, but many fans of hers are taking this as an admission to her heroin addiction. The tweet suggests that this Teen Mom cannot comment on any of these allegations because they haven’t aired yet on the show. What do you think about Jenelle Evans and her problem? Do you think she’s lying to her fans? Let us know what you think in the comments section below.