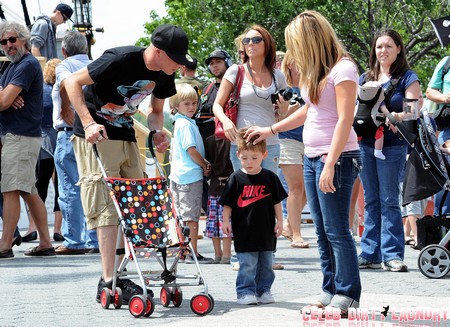 I mean, honestly, there is no end to the drama that follows Jenelle Evans of MTV’s Teen Mom 2 fame. All that comes to mind when I hear any story about Evans is: “WTF!” This latest story is no exception.

Apparently, Evans and her new boyfriend Courtland Rogers have been accused by Rogers’ baby-mama, Taylor Lewis, that they hatched a plan to try and kidnap Rogers’ daughter, Jordan. Well, like every single quasi-celebrity of this new generation, Evans has gone to Twitter to defend herself:

“Courtlands baby mama said we stole her daughter. It’s not called stealing when both parents have half custody in NC. She smoked crack and Handed his daughter over to Courtlands sister at 2am. Her whole family is fucked up Her dad is in prison, mother stripper, GRANDMA locked up. There’s the truth everyone.” @PBandJenelley_1

At first, when I read Evans got a new boyfriend, I was sort of relieved that she finally got rid of low-down, druggie, no good ex-boyfriend Kieffer Delp, but is this Rogers guy even any better? He seems to have a lot of drama surrounding his life with his baby mama. Drama that Evans doesn’t need. In fact, I feel that Evans shouldn’t even be dating anyone. She has gotten her act together this last couple of months, but she obviously still has low self-esteem issues and needs to get those sorted out before she can be in a healthy relationship.

Now, I think it’s all well and good that Evans is concerned about the well-being of a child that’s not hers, but she herself still hasn’t gained custody of her own child, Jace. Shouldn’t she be more concerned with that fact, than tweeting to the world private information about another man’s child?

“If we knew where Courtlands daughter was at this moment we would go get her, but guess he has to go to court… And his baby mama will NOT tell us where she is. Last time we knew she was at a crackheads house with like 5 dudes. :( sad…” @PBandJenelley_1

Yes, of course, if this is true, then it is sad indeed. But to fight for custody of another man’s child through the court system takes lot of dedication, time and money.  Is Evans ready for that? She hasn’t had the best record for being responsible and has made a lot of dumb choices.  With another child possibly in the mix, she definitely needs to become a more responsible and reliable person as well as a parent.

What do you guys think? Is Jenelle’s couple of months of sobriety enough for her to take care of two kids? Is this new guy good for her, or should she slow down and really get her life together for the sake of her own child?