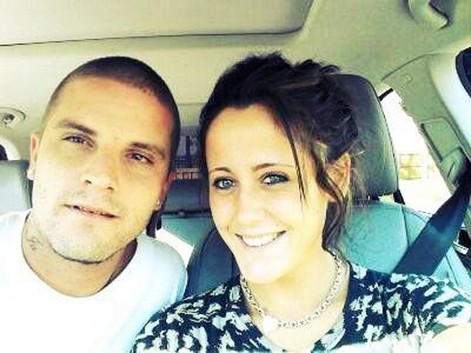 Teen Mom 2’s Jenelle Evans is not one for playing by the rules. Whether it’s a teen pregnancy, a half dozen drug charges, or neglecting her son Jace, she has her own unique way of living. Now, the 20-year-old, who has never had custody of her 3-year-old, has tied the knot with another single parent, Courtland Rogers. The couple started dating over the summer, though they’ve known each other since junior high school. Last week, Courtland showed us his new tattoo, Jenelle’s name over his heart. He explained the rash decision, “I wanted the whole world to not only see but to know who has my heart.” That seems pretty backwards—I could hear about their relationship and know they were in love just fine, but now I can see the tattoo. I wonder how much that’ll hurt to remove ten years down the road.

Jenelle’s sister Ashleigh Evans Wilson reported the news of the wedding to Radar Online. “My sister got married this morning. It was a shotgun courthouse wedding. My mother was totally shocked and had to hear it from someone else. Our whole family is shocked because they have not been dating for very long. I’m sure she did this to distract from all the drug accusations that have been flying around and of course she thinks it will help her get custody of Jace back from mom [Barbara Evans] if she is married.”

You know what really helps you get custody back—even more than getting married does? Staying clean! This girl is absolutely insane. This week on Teen Mom 2 we watched her choose jail time over a year-long drug free probation, and then freak out when her jail time overlapped with a Kesha concert. The only thing this wedding is going to do for her is increase her legal fees.

But we wonder if there was another reason to the wedding—could Jenelle be pregnant and terrified of being alone?  That’s what Gary Head says via twitter!  We’re sure MTV is already scheming a way to make a Jenelle Evans: Happily Ever After a TV special. I think Dr. Drew would agree with me—Jenelle needs to focus on getting sober, getting a stable job and education, staying out of the news, and earning custody of Jace before she enters any romantic relationship! Boy, the Teen Mom 2 Check Up will be to die for! Are you delighted or horrified by the news?