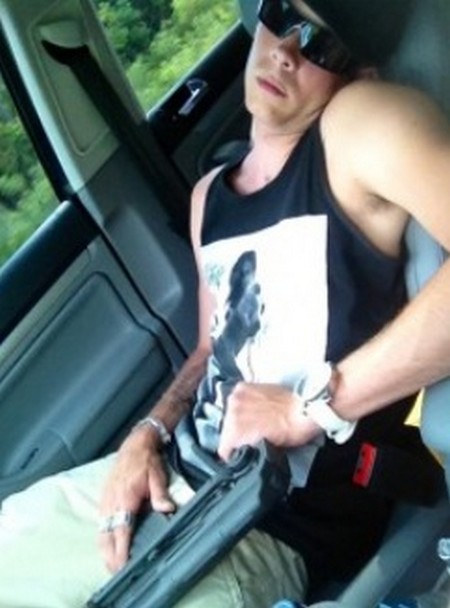 The above photo is of Gary Head, the 24 year old fiancee of Teen Mom 2’s Jenelle Evans, carrying his gun.

Here in America, we have a thing called the 2nd Amendment, which is known as “the right to bear arms.” In other words, the right to own a gun. That being said, opinions vary a great deal within the USA on this controversial right.

Those who are more gun-weary tend to feel that guns do more harm than good. They tend to be in favor of tighter gun-control restrictions (such as who can own a gun and where a gun owner may carry one). Some people feel guns should be outlawed altogether.

Gary is definitely on the more gun-friendly side of the spectrum. He freely and unapologetically admits he carries his gun wherever he goes. “[You] never know when something will go down,” he tweeted. “I keep it on me EVERYWHERE.”

Asked why he would even need a gun, Gary replied, “because people in this world now days are pure mean and I use it to keep the devil up off me.”

That being said, there’s no question as to where this Marine stands with the 2nd Amendment!