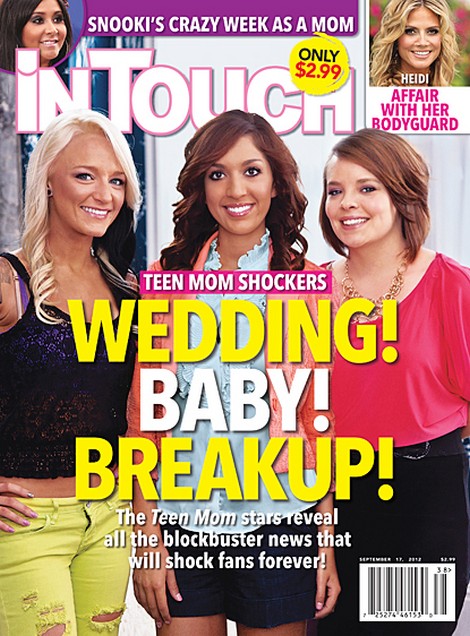 Teen Mom drama takes center stage in the new issue of In Touch Weekly, as the cover touts a wedding, break up and baby news.  Rumor has it that Catelynn Lowell is getting married and Farrah Abraham has confirmed a split with her boyfriend of only two months, John Parra.

“What went wrong was that he was upset I wouldn’t kiss him yet and make more time for him and move to LA. He texted me saying he didn’t want to talk any more.  “I have my values in line and I stick to them.  I’m happy I chose not to touch him or get serious with some guy who seems controlling & clingy,” the 21-year-old says. “I’m happy I shield Sophia from any guy drama that is caused by whomever I’m dating at the time.”

Maci Bookout will also confront her ex Ryan Edwards and his current girlfriend, Dalis Connell in the finale of Teen Mom.  In Touch has all the details of that blockbuster news that will shock fans forever!

Also in the latest issue you’ll get the inside scoop on Heidi Klum’s relationship with her body guard, Martin Kirsten. The two have been dating for three months now and Heidi’s ex, Seal, is none too happy with the situation. Apparently it’s fine for him to hook up with multiple women while his kids are in the next room, but Heidi dating the guy that protects her children is unacceptable to Seal. Check out this article to find out more about Heidi’s new romance.

In Touch has all the details on Snooki’s first week as a new mom to her son, Enzo. How is everyone’s favorite hard partying, Jersey chick holding up under the pressure of new motherhood and minimal sleep?  Has she had that first cocktail yet? You’ll have to pick the new issue to find out!