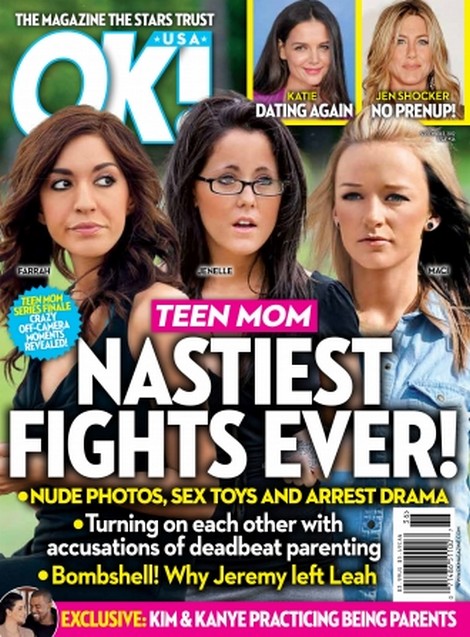 The current issue of OK! Magazine features the cover story “Teen Mom – Nastiest Fights Ever!”  The magazine has all the dirt on the crazy off-camera moments and they are ready to reveal all to us.  Teen Mom’s Farrah Abraham, Jenelle Evans, Maci Bookout & more have been having nasty fights!

OK! has the exclusive details on the Teen Mom season finale: “Nude photos, sex toys and arrest drama.  The Teen Mom’s turning on each other with accusations of deadbeat parenting.  The bombshell report on why Jeremy Calvert left Leah Messer.”

It was revealed earlier this year that the original Teen Mom cast would be getting the boot and I can understand why these girls are all out of control.  Farrah recently said about the series ending, “We’re happy that we had the opportunity, we’re happy to move forward … This whole experience was way more dramatic than I ever thought it could be.”

Also included in this week’s issue Kim Kardashian and Kanye West have babies on their brain.  The couple are reportedly practicing being parents.  I guess Kim is hoping a little Kimmie will help her tattered reputation.  Is it kid time for Kimye?  I hope not!

The magazine also explores the trend in Hollywood of older actresses hooking up with younger men.  From Mariah Carey to J.Lo, Madonna to Eva Mendes, the hottest accessory is a boy toy!

To see photos of the Teen Mom and Teen Mom2 cast reunite in New York City and to find out more about all the other stories, pick up the current issue of OK! Magazine!