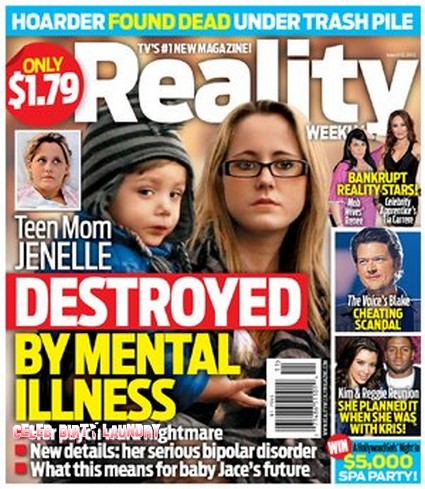 The March 12th, 2012 issue of Reality Weekly features the cover story ‘Teen Mom Jenelle – Destroyed by Mental Illness.’  The magazine claims that Teen Mom Jenelle Evans had a psych ward nightmare and they have all the news about her serious bipolar disorder.  They go on to speculate on what this this means for Her son Jace’s future.

On the Teen Mom 2 finale, Jenelle Evans was diagnosed by her rehab doctors with bipolar disorder.  She said about being diagnosed: “I thought about it, but I was always in denial, like no, no.  “Because everyone’s like, ‘Your brother and sister are just crazy, how are you normal?’ I’ve always just been called normal my whole life, but then finally when I hit that very low point in my life, I was like, ‘Well, maybe something is wrong.'”

Meanwhile this week Jenelle posted intimate photos of herself and new beau Gary Head on Facebook.  In the pictures Jenelle and Gary appeared to in her bedroom together in suggestive poses and they are certainly inappropriate to have posted.  Jenelle needs to get her act together.

To find out all this and more, pick up the current issue of Reality Weekly.