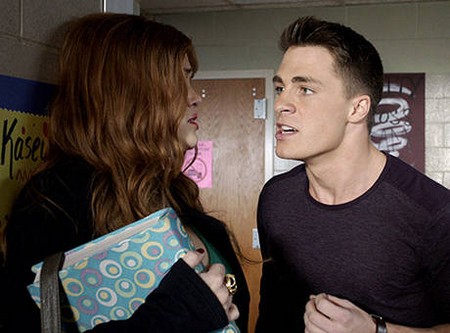 Tonight on MTV is an all new episode of Teen Wolf called ‘Battlefield’. We are in the countdown to the finale of Teen Wolf, just two more episodes left. On tonight’s episode Scott has to pull double duty by playing in the championship lacrosse game and finding a way to stop Gerard. If you missed last week’s show called ‘Party Guessed’, we have a full and detailed recap here for you.

On last week’s episode the wolves that Derek has turned got prepared to go through their first transformation together on a full moon, and Derek locked them up so that he could observe the group and keep them safe.

The show begins with Stiles talking to the guidance counselor, who I’m sure has a role other than being just a counselor. We also learn in this moment that Stiles’s dad has just been reinstated as Sheriff.

Scott gets ready for school and there’s tension — major tension between — him and his mom.

We also see Allison hatching a plan with her father.

Meanwhile, the counselor continues to talk with Stiles — about his anxiety. He tells her that he feels like he’s drowning. This opening dialogue is REALLY good. I mean really good. She tells him to remember what Virgil said: “If it feels like you’re going through Hell . . . keep going.” She tells him to persist, to keep fighting, and to, no matter what, never give up. Stiles feels as if he’s lost — or that he and his friends are losing this strange battle they’ve found themselves in.

We see Scott get out of the shower. He walks over to the mirror and hears a noise. He walks out of his bathroom and see his mom being strangle in the corner by the Kanima. Gerard sits in the corner. “As you can see Scott, there’s been a few recent developments. I think we should catch up.” Scott tells her to let her go. Gerard wants to talk. Gerard says he wants the same thing he’s always wanted: Derek and his pack. Gerard thinks that Scott can draw them out into the open. He says that he didn’t just come to town to “bury his daughter,” but to also get vengeance. Scott’s mom is frustrated and says to just give Gerard whatever he wants. “It’s not that easy,” says Scott. But she doesn’t care. It’s that easy in her mind.

Derek talks with his pack. He’s losing them. They want out. They want to join another pack.

Scott is at the vet’s office. Isaac shows up. The vet welcomes him in.

Meanwhile, Derek’s pack says they’ve made up their minds. They say they’re leaving. Derek says that they’re not just “leaving,” but that they’re running — that they’re giving up. Derek’s uncle, Peter Hale, shows up.

Isaac is intrigued by a dying dog at the vet. The vet tells him that he can also help others and shows him how to take people’s — or any living thing’s — pain away.

Derek’s uncle just wants to talk with Derek, but Derek’s not having any of it and throws him across the room.

Isaac tells Scott of his pack’s plan to leave. He asks Scott for advice. As Isaac leaves, he says that Jackson will be at the lacrosse game tonight . . . Scott wasn’t planning on going to the game. Until he heard that news.

The lacrosse game starts. Everyone is in the locker room. Danny asks if Jackson’s all right. Jackson warns Danny — he tells him to stay in the goal. Scott’s mom comes into the locker room, just in time for the coach’s pump-up speech. Gerard comes in and says that there will only be one captain. The coach says that Scott will be on the bench. Not good.

Meanwhile, Derek is punching the crap out of his uncle. Derek’s uncle says that he wants to help him. Derek insists that he can’t help him.

Scott is sitting beside Stiles. Stiles continues to get worked up. He confesses to the fact that he wants to help, and he feels isolated because he “can’t do the things some of these people can do.” Stiles is chosen to play on the field tonight. Gerard talks with Scott from across the field and says the “Game is about to get interesting.” Scott uses his superhuman hearing to listen.

As Derek’s pack flees into the woods to find the new wolf pack, they discover that someone is making fake wolf sounds. Guess who’s responsible? Allison and her father.

Gerard says that unless he gives him Derek that he’ll have Jackson kill someone.

Derek’s uncle tells Derek that they both need each other’s help.

Meanwhile, Stiles is making a fool of himself on the field. He can’t even catch the ball, let alone throw it. Isaac shows up. He came to help. He sits beside Scott.

Allison and her father chase Derek’s pack, all of them except for Isaac. Allison hops off her quad and shoots Erica in the leg. Erica tells Boyd to run, to getaway. Allison approaches Erica and, with an arrow drawn, prepares to finish her off . . . .

Isaac asks Scott if he has a plan. Scott says he needs to get on the field. Isaac goes on the field and practically takes out his own team.

Boyd comes back to save Erica. Allison shoots him repeatedly with arrows. Chris Argent shoots the bow out of Allison’s hand. She’s getting carried away, blinded by her rage.

Gerard says that if he lets him have Derek that he’ll let him have Allison. Chris Argent tells Allison that they don’t kill wolves without a reason, they only catch them. She tells him that maybe that’s not how he does things . . . but she caught them and, basically, she’ll do what she wants.

Isaac is paralyzed in the locker room. Gerard is there with his REALLY BIG SWORD. He’s trying to cut Isaac in half for trying to stand in his way. He says: “This would be so much more poetic if it were half time.” LOL MTV you’re so funny HAHAHA *ugh*.

Peter Hale continues to talk to Derek. Peter tells Derek something that he’ll need. Peter says he knows how to save Jackson.

Gerard is about to chop Isaac in half when, out of nowhere, Scott shows up behind him.

Meanwhile, on the field, Stiles picks up the ball. He gets it to the goal. He shoots it. And scores!

Scott asks Isaac where Jackson is.

Peter tells Derek that there’s a myth and, while myth and legends are primarily just stories, sometimes they contain bits of truth. Jackson has no identity because he’s an orphan. Peter tells Derek that someone has to access his heart, make him feel as if he has an identity — something that the Kanima lacks — the reason why it always seeks a master. Peter says that Lydia may be able to get through to him.

Scott returns to the field. Jackson is turning into the Kanima. He takes off his gloves to reveal his venom-laded claws. The lacrosse team wins.

The lights go out and everyone is in a panic. He hears his mother scream. His mother says that someone is hurt and down on the field. It’s Jackson. Lydia runs over screaming. There are claw marks in his stomach. Scott’s mother says he’s not breathing. It seems as if he clawed himself in the stomach. Stiles’s dad notices that Stiles is nowhere to be found.

The show ends. Tune in next week!