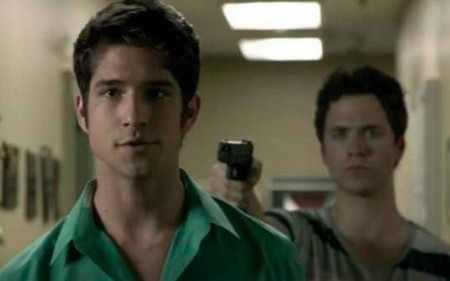 Tonight on MTV is an all new episode of Teen Wolf called “Fury”. On tonight’s episode, while following Derek, Allison is lead back to the sheriff’s station, where Stiles, Melissa, Scott, and the Sheriff are also being held hostage. If you missed last week’s show called ‘Party Guessed’, we have a full and detailed recap here for you.

On last week’s episode the wolves and Derek got prepared to go through their first transformation together on a full moon, and Derek locked them up so that he can observe the group and keep them safe. Meanwhile, at the same time that his relationship with Allison got even rockier, Scott had to go to Lydia’s birthday party with Stiles.

On tonight’s show Allison will follow Derek to the sheriff’s station, where a volatile situation has broken out: Scott, Stiles, Melissa and Sheriff Stilinski are being held hostage.  Remember the season is quickly coming to a close — tonight’s episode is the third to last of season 2.

The show opens with a flashback involving Matt and Jackson — the flashback details the moment when the Kanima approached that mysterious person in the car. We see a touching moment when some form of bond is established between the two. In this moment we see Matt become Jackson’s (the Kanima’s) master of sorts.

Stiles and Scott try to convince Stiles’s dad that it was Matt. They convince Stiles’s dad to let them into police station to look at the evidence. They look at the security tapes and see that Matt was in the hospital; Matt stops to talk with a nurse and Scott immediately recognizes that it’s his mother. He calls her to ask if she remembers talking with that guy — she says yes. Stiles’s dad begins to think that his son and Scott’s theory is a plausible one and encourages Scott to get his mother down to the station immediately to make an official ID — if she can, they can get a search warrant. Stiles walks out of the office only to find a policewoman dead behind the front desk. He turns around . . . Matt is pointing a gun in his face.

The vet wakes Derek up after he was attacked by Lydia. He remembers what happened — Peter’s revival. The vet tells Derek that he’s still an alpha. He also tells him that he’s been an advisor to his family for a long time . . . and that he needs to trust Scott — the one person he needs to trust but, unfortunately, doesn’t trust him.

Allison is talking with her creepy grandfather. He says, “I won’t pretend to know what you’re going through.” She says, “Then leave.” He says that he has something for her . . . it’s a letter that her mother wrote for her, explaining why exactly she took her life. He uses this as an opportunity to make Allison hate werewolves and yearn for vengeance.

Back in the police station, Matt is making Scott and Stiles destroy all the evidence. Derek arrives, but when he does he’s paralyzed . . . the Kanima is right behind him. SPECIAL DELIVERY lol.

After the commercial we see Allison burning the letter her mother allegedly wrote. Allison is angry. I MEAN REALLY PISSED OFF. We see her prepare her crossbow, ready her sharpest arrows.

At the police station, Matt is making Jackson — who is half -man half-kanima right now — scratch Stiles and Derek. Scott’s mom finally arrives and Matt shoot Scott. He locks them all up in the jail cell. After everything, Matt finally reveals to Scott what he’s after . . . he wants Gerard Argent’s Bestiary. Scott asks why. Matt lifts up his shirt, revealing a patch of skin — borderline reptilian — that pulses and glows with a strange color.

Allison is still angry and she’s strategizing with her father and grandfather. Gerard says that since her mother is gone that the leadership role falls on her now. She says that they need to kill Derek . . . because he killed her mother. She says if anyone stands in their way that they will kill them.

Back at the police station Matt tells Scott about the source of his anger: he was thrown into the pool by the swim team. The monologue dragged on for a bit, summarizing bits and pieces of the story that we could’ve figured out by ourselves; however, it delved further into the bond shared by Matt and Jackson. Matt revealed that whoever he took a picture of that Jackson would, eventually, kill them. He tells Scott about the Greek Furies, powerful beings with snakes for hair who killed those who were “meant” to be killed. Matt believes that Jackson/The Kanima is his “Fury.”

. . . as Matt is giving his dreary-bad-guy monologue, the lights in the police station go out. A car pulls up. The windows are shot out with a machine gun. It cuts to a commercial.

The Argents, along with Allison, are doing some serious damage to the police station. They throw in a smoke bomb. Scott runs through the smoke, seeing this as an opportunity, and knocks Jackson to the ground. Scott rescues Stiles, gets him to safety. They hide in a closet.

Allison and her father enter the station. Stiles’s father and Scott’s mother are still imprisoned. Scott runs into Allison, who is hellbent on finding Derek. He asks her what happened. She tells him that he needs to stay out of her way.

Allison is lurking in the shadows and together, alongside her father, they proceed through the dark, smoky station. The Kanima jumps on her father. Allison shoots the Kanima in the head with an arrow, but he simply pulls it out and goes after her. Allison runs and hides. The Kanima looks for her . . . she runs up behind him and attacks him. She stabs him twice, once in the heart another in the throat. But he’s unharmed and scratches her in the neck. She falls to the floor paralyzed. Matt approaches her fallen body and says, “If I can’t have you, no one can!”

It cuts to a commercial, but we’re awaiting the moment when Scott rushes into save the day — which will, undoubtedly, further complicate Allison and Scott’s relationship.

It turns out that Scott actually doesn’t save Allison. Allison’s dad approaches her. He picks her up. Stiles’s dad breaks free, but Matt quickly punches him, knocking him to the floor. Scott’s mom just wants to see her son. Matt asks her how clueless she is. The Kanima storms in and he and Derek have a fight. Scott stumbles in and his mother sees him for what he really is. She’s terrified and gasps.

Gerard finds Matt and throws him in the river and drowns him. The Kanima is standing by and, on the hill, Peter is watching as well. The Kanima crawls out into the moonlight and makes a bond with — Yep, you guessed it — Gerard.

Gerard now controls the Kanima. Peter, looking scared, walks off into the woods. What will Gerard do with the Kanima now that it’s under his control? I have a feeling he’ll use Jackson to his advantage. We look forward to next week! The season is quickly coming to an end. Who do you think is going to be axed next?