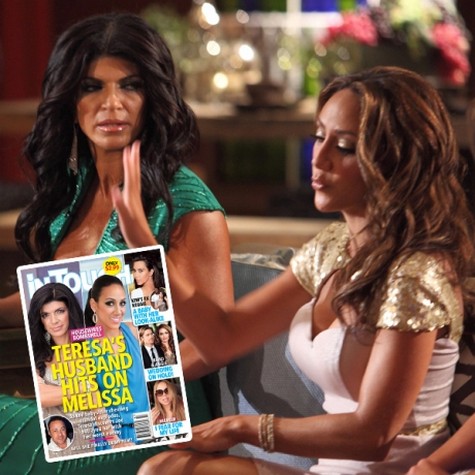 Suddenly the animosity between The Real Housewive’s of New Jersey’s Teresa Giudice and Melissa Gorga is beginning to make sense!  Even if you’ve never seen a moment of the show you probably know that Teresa absolutely hates her sister-in-law Melissa. I mean her behavior has been flat out evil towards her beloved brothers’ wife and I’ve never really understood why, until now. According to the latest issue of In Touch, Joe Giudice openly lusted after and hit on Melissa before she married Joe Gorga!  Not just that, but Teresa and Joe were already married and she was aware of her husbands actions!  Says an In Touch source,

“When Melissa started dating Teresa’s brother, Joe [Giudice] would flirt with her and check her out whenever Teresa wasn’t looking,” a close source tells the new issue of In Touch — on newsstands now. “Melissa always told me he was a ‘creep.’ He’s so disrespectful to Teresa, but she turns a blind eye.  Joe got a kick out of flirting with Melissa. He doesn’t care — he thinks he’s an attractive guy.”

I’m laughing at the thought of Melissa ever giving a guy like Joe Giudice a moment of attention. He’s a slimeball!

But now it all makes perfect sense. Teresa has obviously been jealous of Melissa for a multitude of reasons- the ladies all love her, she seems to have a very happy marriage, her kids are well-behaved- Teresa wishes her life even half resembled Melissa’s. But add to the fact that Joe Giudice is a known cheater and he has raised an eyebrow and made a pass at this woman that is part of the family! Teresa will never blame Joe, she always blames the other person, so she has to hate Melissa for grabbing her husband’s attention!

Does it all make more sense to you too?  This is that deep rooted, gut level jealousy at work, wouldn’t you agree?