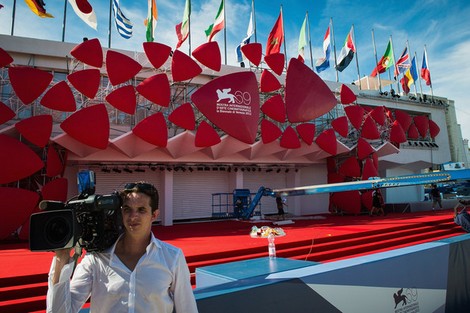 The esteemed Golden Lion – one of the most important film awards in the world – imposes its strength and knowledge on those entering the 69th Annual Venice Film Festival. It does not glean, nor shimmer in the late sun, but merely settles like a castle and broods in its awful beauty. This Golden Lion does not signify film. No, it signifies the artistic achievements in film making, the brilliant directorial minds of tomorrow and the 69 years which have passed before the statuette, filled to the utmost brim with cinematic nostalgia.

This year’s line up has been trimmed to make way for a more detailed focus on artistic roots. The reclusive and slightly insane Terrence Malick (The Tree of Life) sees a return this year to the festival with his latest avant garde offering, “To The Wonder”, starring Ben Affleck and Rachel McAdams. Malick’s film might be one of the talked about at this year’s festival, but it has to compete against 17 other films, making this year’s line up slimmer, with 5 films less than last year.

Alberto Barbera, who ran the event from 1998 to 2002, returns this year with a new approach – less films and no automatic entry, even if you’re an established filmmaker. He told the LAtimes.com,”I don’t like the general trend which contaminates all the festivals of the world, getting bigger and bigger, inviting more and more movies,” Barbera said by phone from his Venice office. “You have to say no to a lot more filmmakers, and it’s not an easy thing to tell someone that maybe it’s better to come to Venice with your next film instead of this one. But I like this idea that there is no automatic entry, even for well-established filmmakers.”

The festival opens with the exquisite Mira Nair’s “The Reluctant Fundamentalist”. The film touches on the tender subject of 9/11, with a Pakistan-born Princeton graduate having to cut short his Wall Street dreams due to the terrorist attacks on the fateful day which is clothed in infamy. Robert Redford’s “The Company You Keep” is up next, with Ollver Assayas’ “Something In The Air” hot on its heels. Brian De Palma returns with a new masterpiece called “Passion”, while the neo-realist Ramin Bahrani offers an unlikely Zac Efron film called “At Any Price”, which many have touted to be Efron’s break into non-conformist cinema.

However, the above mentioned films pale in comparison when Malick’s “To The Wonder” and “The Master”, by Paul Thomas Anderson, are named. Many critics have predicted that this might be the year for Malick, after his phenomenal success with his symbolic secular reality “The Tree of Life”.

The Venice Film Festival is a type of premature Oscar season, as many of these films are usually punted during Oscar season for recognition. We’re seeing a strong return of directors who have been at the forefront of their respective careers, with Anderson and Malick being the most talked about this season. The excitement surrounding this famous Venetian festival is not without merit. Several of the smaller, less well known films, are usually shopped at this festival to worldwide distributors. The films are bought for worldwide distribution and given the opportunity to become more than they would have ever been.

The Golden Lion will be lying in wait for the next 11 days, closely following the excitement and drama of the festival. It will show its strength once the winner of the award is announced. The winning film will immediately become one of the hottest properties in the entire world.

We’re betting on Malick. Let us know your thoughts in the comments below.

Celebrities are spotted at the 69th Venice Film Festival on August 28 and 29, 2012 in Venice, Italy. Note the need for boats in order to get around.