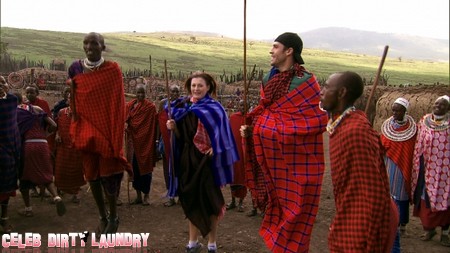 Emmy award winning The Amazing Race 2012 returns tonight to CBS with a new episode titled ‘I Didn’t Make Her Cry.’   Last week’s episode of the race saw The race continued in Azerbaijan, where teams took part in a helicopter-evacuation training exercise. At a Detour, the duos had to scrub excess oil off of some very hairy bathers.

The last two teams racing to the pit stop are: Vanessa & Ralph and Joey and Danny.  At the end of the race Joey & Danny were the last team to arrive, they were ELMINATED from the race. If you missed the show you can read our full recap here!

On this week’s show the six remaining teams set off for Africa on the seventh leg of the race. The disagreement that has been building up all season culminates in this episode.  Tears are shed as the claws come out in Tanzania and racers stand in amazement as they train alongside the Masai warriors.  In the preview we see Rachel from Big Brother say: “Why don’t you both stay out of my face” to Vanessa.  Vanessa does not take it sitting down she fires back and makes a nasty comment about Rachel’s plastic surgery.  It looks like it will be an explosive episode with crocodile tears from Rachel – so don’t miss it!

We will be live blogging the show with all the up-to-the-minute details at 8PM EST so make sure to come back to this spot and watch the show with us.   Make sure to refresh often so you get the most current info!  While you wait for our recap check out the sneak peek video of tonight’s show below!

RECAP: It’s the start of the 7th leg, Rachel and Dave won the last leg and are the first to depart, they must travel to Kilimanjaro, Tanzania. Rachel R. is so excited, she has wanted to go on African safari her whole life – they are at a travel agency with Art & JJ trying to book their trip. Art tells them that Nary & Jamie are agents, he figured it out in the last leg, there is no way they are teachers. Brendon doesn’t care who Nary & Jamie are, doesn’t matter to him but as soon as they walk in, Brendon tells them that he knows.

Vanessa & Ralph have just arrived in the travel agency and Rachel R. tells them the earliest flight is 10am, but Vanessa thinks she is lying.

All teams are now travelling to Kilimanjaro, Tanzania via Nairobi. The teams are so exited to arrive in Africa and all one of them could say is “Hakuna Matata” that is the first thing they think of is the Lion King, what are they, five years old?

Rachel R. & Brendon are upset because they felt Vanessa & Dave pushed ahead of them at the airport, a disagreement then name calling starts. Vanessa tells Rachel that all she does is “run off her mouth”, Rachel states that Vanessa is “like 38 years old” then Vanessa slams Rachel R. with “next time get your nose done before you get your boobs done”. Rachel is humiliated, she feels the whole game has been about Vanessa trashing her. Rachel is crying and Vanessa doesn’t give a crap.

Art & JJ confront Nary & Jamie, they want to stir the pot but the women are sticking to their story about being kindergarten teachers.

Teams have landed and now they must head to the Arusha Airstrip. Art & JJ are the first team to arrive, they are on the first team, Rachel R. and Brendon are next with all the other teams following.

It’s morning, Art  & JJ are on the first plane with Brendon & Rachel R. Bopper & Mark, Rachel & Dave are on the next plane. Vanessa & Ralph, Nary & Jamie are on the last plane.

The first charter plane has landed, teams must choose a safari truck and head to Ngorongoro Crater. Art & JJ are the first team arrive, it is a Detour and they have to choose between “Marksmaship” where they learn to hunt and master the use of a local weapon or “Courtship” where teams join Bandai warriors in traditional jumping ritual for an exhausting minute.

Art & JJ chose to master the tool while Brendon & Rachel R. choose to jump for one minute. Brendon & Rachel R. are done first and get their next clue, they must bike ride back to their Safari trucks then head to Simba Campsite. Art & JJ are close behind them with the rest of the teams trying to finish the Detour. Nary & Jamie are currently in fifth place.

Rachel & Dave are having a problem, Rachel thinks the bike is too tall for her, falls off and then refuses to get back up on it which is definitely going to slow them down, but the other teams make mistakes getting to the Simba Campsite and Rachel & Dave end up being the first ones to arrive.

At the campsite, teams must assemble their own tent to camp out in for the evening, once it is constructed, they can check in at the Pit Stop.

Brendon & Rachel R., Bopper & Mark are the next two teams to arrive at the campsite with Art & JJ closely behind them.

Meanwhile, Vanessa & Ralph had problems with the bicycles as well which caused them to fall behind.

Rachel & Dave are building their tent and begin arguing and Dave tells her to shut her mouth, she tells him that he is the most negative person she has ever met in her life.

A lot of teams are having a head time building their tents, Rachel & Dave are the first team to finish with Bopper & Mark second.

It’s now up to Nary & Jamie, Ralph & Vanessa, who will be the first team to arrive and who will be eliminated?

Vanessa & Ralph are the fifth team to arrive with Nary & Jamie arriving last, but this is a non-elimination race and they still have a chance to win this race but they will have a Speed Bump in the next leg.