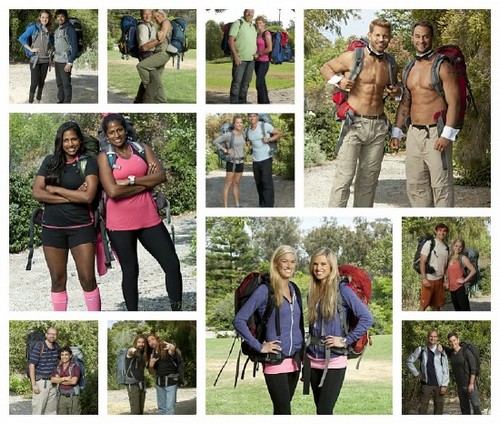 Multi-Emmy Award-winning series The Amazing Race returns to CBS tonight with the premiere of season 21 called “Double Your Money.”  After 21 season you have to ask how they keep the 21st race around the world amazing.  Host Phil Keoghan sounded out about it saying, “I like to think of it in the spirit of Dr. Seuss.  New faces and new places make amazing races.”

Phil Keoghan returns as the host of the show which pits 11 teams, each comprised of two members, against each other on a trek around the world for approximately 25 days.  This season’s group featuring Chippendale dancers, a double amputee who’s also a snowboarding champion, an monster truck drivers will travel to nine countries, including Indonesia, China and France.

Throughout the season teams who are the farthest behind will gradually be eliminated as the contest progresses, with the first team to arrive at the final destination winning $1 million.

On tonight’s show the pressure hits an all-time high as Teams discover that a new twist will allow one Team to possibly win a $2 million grand prize. Meanwhile, one team’s act of kindness comes back to haunt them, on the season premiere of THE AMAZING RACE tonight.

Tonight’s season premiere is going to be another fun one, which you won’t want to miss. So be sure to tune in for our live coverage of of the season 21 premiere of The Amazing Race — tonight at 8PM EST! While you wait for our recap, hit the comments and let us know how excited you are about the new season of the Amazing Race?

Tonight’s show begins with an introduction to each of the teams. Everything from goat farmer’s to ex rockers to Chippendales.  Personally right off the bat I like James and Mark. James was a member of 80’s hair band, White Lion and Mark is an attorney that represents musicians like James. I also dig the older couple that are monster truckers, Rob and Kelley.

The first task is to bungee off the side of a bridge which looks scary as crap. Once they hit the ground they are given instructions on how to make their way to Shanghai, China. Only the first seven teams to check in to China Airlines will make it on the fastest flight.

The first flight arrives in more than an hour ahead of the second flight and the teams are scrambling because ultimately a cool 2 million dollars is on the line. Jaymes and James are currently leading the pack when they reach the first roadblock, a table tennis game with a Chinese child champion. They struggle as do twins Natalie and Nadiya. Abbie and Ryan are the first team to beat the ten year old and move on to the next task.

It looks like Rob and Kelley made a wrong turn somewhere because while they made it onto that first flight to China, they are completely lost now and already need to make up for lost time. As the teams are slowly beating the table tennis champ Natalie and Nadiya are failing and coming unglued. These two will destroy each other long before they have an opportunity to do event halfway decent here.

James and Abba (the rocker and lawyer) make it to the next task and find themselves having to eat a papaya bowl filled with fallopian tube smoosh. In case it’s not gross enough they have to get it down with chopsticks. As Chippendales Jaymes puts it, “For two million dollars you do what you have to do!” Rob ate the stuff but then vomited it all down the front of himself. Does that count?

From there they all move on to The Bund where they need to find a woman using an abacus. Amy and Daniel find her first and they are first to make themselves to the Bund Observatory. The last team to make it there on foot will be eliminated.  Abbie and Ryan are hot on Amy and Daniel’s heels and surpass them. They make it to the Bund Signal Tower first. They also see Amy as more of a threat then anyone else in the game. Caitlin and Brittany are the third team with Natalie and Nadiya in fourth place behind them. Rob and Kelley scoot into fifth place after initially being lost and James and Abba make it to the tower in 6th place.

Gary and Will are determined to do well and freely admit that they’ll do whatever it takes- cheat, lie, whatever. They’re still in the race at team number 8 with Trey and Lexi right behind them as team 9.  The Chippendales, Jaymes and James beat Rob and Sheila by 15 seconds and those seconds were the difference between staying or leaving the race. Rob and Sheila were the first team to leave. Tune in next week to watch the remaining ten teams do battle.