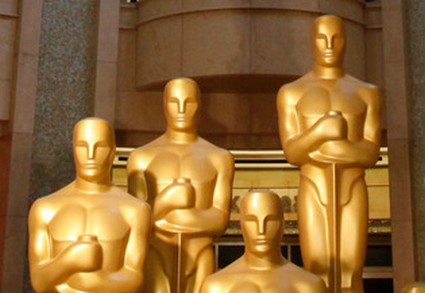 The Artist which tells the tale of an old-Hollywood love story was named Best Picture, while its star Jean Dujardin took Best Actor and Michel Hazavanicius took home the award for Best Director.

Accepting the Best Actor award first-time nominee Jean, 39,  who saw off stiff competition from Brad Pitt and George Clooney – gushed: “I love your country. So many of you here tonight have inspired me.”

Meryl, 62,  kissed husband Don Gummer before taking to the stage at Los Angeles’ Kodak Theatre to accept her iconic Oscars statuette.  She joked: “When they called my name I had this feeling I could hear half of America going, ‘come on, why her again’, but whatever.”

Praised by award presenter and her ‘Mamma Mia!’ co-star Colin Firth for being “unreasonably good”, she thanked her colleagues and friends for her “inexplicably wonderful career”.

Christopher Plummer, 82, became the Academy’s oldest winner when he was named Best Supporting Actor for his role as a gay father in ‘Beginners’, while Octavia Spencer picked up the Best Supporting Actress title for ‘The Help’.  The show was hosted by Billy Crystal.

A full list of winners at the 2012 Academy Awards:

BEST FILM EDITING:
‘The Girl with the Dragon Tattoo’