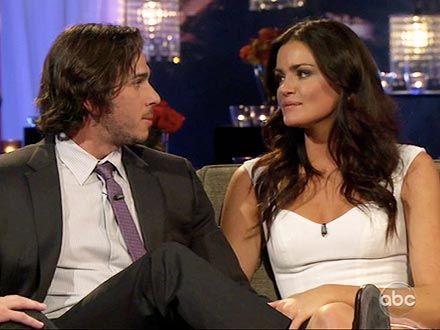 Although both Ben Flajnik and Courtney Robertson have been keeping off the radar ever since The Bachelor ended and their relationship was put to the test.  So what’s been going on with the two – or more importantly, are they still together?

Judging by this recent picture that has surfaced, the horrible aftermath of the reality show seems to have not undone the couple – as of yet anyways.  They appear to be determined to make their relationship work, and both have admitted that despite the bumps (more like mounds) in the road over the last few months, Courtney has said that things are progressing nicely and she’s feeling positive about her and Ben’s future.

Ben’s sister Julia tweeted this picture of the recent double date, and all seems well – well, of course it does – there’s wine on the table.  It’s a must.  As for whether Ben and Courtney are living together, Courtney has said, “she is hopeful it will happen by summer”.  Hmm…I’ll put money on this one…I say it’s been doomed from the start.