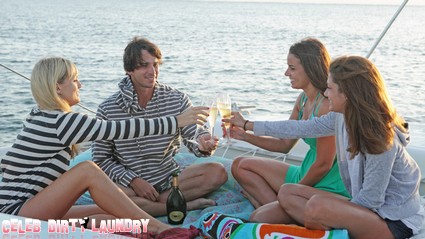 So I just finished watching this week’s episode of The Bachelor – and it’s safe to say that I still feel the exact same way about Courtney. She’s an evil, evil human being. Say what you will that editing goes a long way, Courtney’s true colors are clearly evident once again. Why doesn’t Ben get it? I almost feel like he deserves her. But I’ll get back to that.

This week we saw Ben and the six remaining women travel to Belize, where he got to chose 3 one-on-one dates. Ben and Lindzi share the first one, where they romantically jump out of a helicopter together into the sea. Cute. She was positively terrified but did it ‘for Ben’. Oh yes, and they have a quick make-out session pre-jump. I don’t know about anyone else, but I’m pretty over seeing Ben suck face on a date-to-date basis. All in all, the chemistry between him and Lindzi is undeniable. I stick by my earlier theory that she will be in the final 3.

Date two we saw Ben take Emily on a bike ride through town. If I were her I would have felt ripped off – helicopter ride..bike ride. That’s a no brainer. The two did get the opportunity to go snorkeling for their dinner (he sure knows how to put them to work) and dive for lobsters. While this is all going on, evil Courtney is complaining how she doesn’t know if the spark is there with anymore with Ben. Cry me a river. Emily appears to be falling more and more for Ben, and tries not to think about the other 5 remaining women. Because that’s an easy task to do. After munching on their delicious lobster feast, Emily admits that they lost time with the whole Courtney debacle. Ben agrees but clearly has feelings for her and wonders if he is ready to meet her family. What else is new. Back on the home front, Courtney is sad (red wine no doubt in hand) because she fears Ben might be falling for Emily, and that Emily was ‘really mean to her’. That’s calling the kettle black.

The third date was with… Courtney. Big shocker – looks like her pouting worked. She tells Ben she was bummed Emily got a date whilst climbing up a Mayan temple. She confides to Ben that she worries the feelings might not be there. Blah, blah, blah. Ben falls for her manipulative ways and tells her how wonderful she is and how he wants to meet her family. Ben also tells her he is concerned that she doesn’t get along with the other girls. What’s your first clue Ben? In her interview piece after the date Courtney does make-shift kill shots with her hands implying that the other girls are gonesville and her chance at getting a ring is in the bag. Good god I hope this isn’t the case.

The group date had Rachel, Kacie B, and Nicki all getting woken up at 4 am. Thank god no one was sleeping in the buff. He surprises them by taking them swimming with sharks. This would scare the hell out of me. Rachel uses her fear of sharks to monopolize her time with him, leaving Kacie B and Nicki to fend for themselves in the shark-bait water. His time spent so closely with Rachel leaves us to believe that she’ll get the only individual rose of the evening. During the date, the girls open up to Ben about how Courtney really is and that he should be careful. You’d think that this would maybe open up his eyes. At the end of the date, Kacie B gets the rose. She’s still my front-runner, but I fear her age will play a huge factor.

At the final rose ceremony, Chris reveals that there will be no cocktail party and that Ben knows who will get a rose. Before Ben hands out the roses, he pulls Courtney aside to see what her true motives are. During this time all the other girls, especially Emily, believe she is being sent home and that Ben has finally seen the light. Not so much. In the end, it’s Emily and Rachel who get sent home, and the last scene we see is devious/evil/horrible Courtney’s cunning smirk because Emily is now out of the picture. The two blonde’s leave in tears..you know how the story goes.

Next week is family-meeting time. Once again, I’m dying to see the couple responsible for bringing up Courtney. I also think there should be another show that films Ben’s reactions while watching the show. Can you imagine him watching Courtney’s behaviour – especially if she in fact is the one he proposes to??  Like I said, if he doesn’t see it he deserves her.

What did you think of the show – sound out in the comments and let us know!

Stay tuned for next week’s episode, it looks to be a good one!