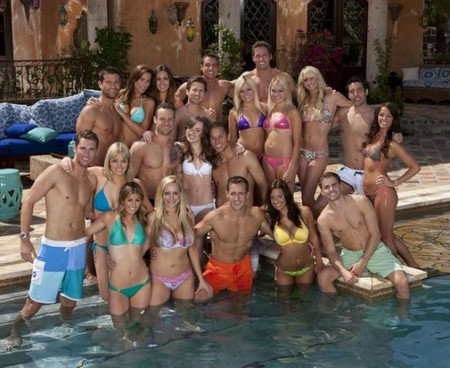 Tonight The Bachelor Pad is back when 15 crazy characters from “The Bachelorette” and “The Bachelor” return to reality TV with 5 super fans in a 2 hour premiere episode on ABC.

There will be some characters that we absolutely love and then, the ones we love to hate. This is a second chance for the “Bachelor” alums to find love, hang out in an awesome mansion and compete to win $250,000.00.

Every week contestants will face each other in challenges hoping to get immunity and a date with someone of their choice. The winner of every challenge will be able to grant immunity to one of their dates by giving them a rose. Every week, the men and women will vote against each other to decide who leaves the show.

For a full cast list, spoilers and more, check out our The Bachelor Pad 3 Spoiler and Preview Video HERE.  The super fans will definitely be adding spice to the mansion when they compete for love and money with the veterans.

In the first group challenge, “Falling for Love”, they couple up high above the ground, trying to avoid falling out of tilting hearts. The winning couple will be safe from elimination, but the couple who first falls down will have a vote against them at the first Rose Ceremony.

We will be live blogging The Bachelor Pad 3 premiere tonight with all the up-to-the-minute details at 8PM EST so make sure to come back to this spot and watch the show with us.  While you wait for the recap hit the comments and let us know if you are excited for the premiere of The Bachelor Pad season 3?

RECAP: Bachelor Pad is home to the men and women who couldn’t find love on ‘The Bachelor’ and ‘The Bachelorette’, but that’s not all, for the first time ever ‘super fans’ will be added to the mix.

Chris is back, fresh off Emily’s season and shares that he was upset and angry after she dumped him, but believes that ‘Bachelor Pad’ could just be the remedy he is looking for.

Lindzi from Ben’s season is back, she got dumped when he picked Courtney.

Reid is from Jillians’ season and got denied twice, but is back for another chance at love. Reid vows that if Ed is in the house, payback is a *itch, so he better watch out.

Ed is from Jillian’s season, she picked him in the end but they have since broken up. Ed admits that he wasn’t prepared for a serious relationship last time, this time he is in it for the money.

Blakely is from Ben’s season, the girl that everyone hates. She admits that she has grown as a person  and is happy where she is right now, she is doing the show for the money.

Jaclyn is also from Ben’s season and expects the money in the end. Jaclyn reveals that she is a frenemi with Blakely, not a friend.

Kalon is from Emily’s season, he arrived in a helicopter last time and called Emily’s daughter baggage, he is now a villain for speaking his mind. He needs the money, helicopter fuel is expensive. Our favourite villain is back for as he put’s it, “to ruin your summer”.

Paige is a serious fan of the show and she is hoping Chris from Emily’s season is on the show. She definitely thinks she is going to be star struck.

Chris Is a Swat officer, he chases bad guys every day but loves to unwind with ‘The Bachelorette’, he is looking for true love.

Donna is the biggest Bachelor fan, she loves hot boys and money, plus when the attention is on her. She plans on living in her bikini, she knows what she got and knows how to use it.

David loves ‘The Bachelor Pad’, he has a crush on Lindzi and Blakely. He does MMA fighting and plans on using his skills on the show.

Brittany and Erica are twins and they are already dissing on the other women on the show, before even getting there. They don’t like Kalon and have a crush on Chris. They know what’s hot and they know who to have sex with.

The first limo has just arrived, let the journey begin….

Chris B. is the first one to arrive and he claims that he is definitely ready. Lindzi is next and is hopeful to meet the man of her dreams. Chris is thrilled that Lindzi is the next one in. Ed is back and the last time he left he was engaged to Jillian. Nick arrives to mix up the party and Lindzi feels like she is one lucky girl, until Rachel arrives and ruins the whole thing. Ed immediately has his eye on Rachel. Sarah is from Brad’s season and  it went terrible with him, she was sent home on the third episode. Ryan was the 28 year old virgin, now he is the 32 year old virgin that now wants only to win the money and maybe true love. Reid is back and there is still tension between him and Ed. Jaclyn is back and people either love her or hate or, but she doesn’t care.

Rachel and Jaclyn start dissing Blakely when Tony walks. But not far behind, is Blakely which gets Rachel and Jacklyn to put on their fake smiles and pretend to be BFF’s with her. Rahcel hates Blakely so much, it hurts.

Jamie walks in and Chris recognizes her as the crazy kisser. Michael won half the money on ‘The Bachelor Pad’ last season and got himself a disaster in love, this time he only wants to have fun.  Erica R. is back for a more positive experience, she is not looking forward to seeing Kalon because she recently went to the tabloids about him they mingle in the same social scene. Kalon does arrive, in an expensive vehicle and tosses the keys to Chris Harrison.

Donna arrives and she is completely star stuck by Chris Harrison and tells him that she is a huge fan of Michael, last season’s winner.

Chris “Swat” is next, he is another fan and asks Chris H. to have a picture with him. Paige is also a fan, she is sweet and is looks like she is in love with Chris H. David walks in, he is also a fan and a personal trainer. The last fans to arrive are the twins, Brittany and Erica, they are playing the game as one player. Many of the women are not impressed, but the guys have no problem with the twins.

Ed strips down and heads into the pool before Chris H. even gives his official welcome to everyone. He tells everyone that they have a chance to find love and win the $250,000.00. Each week there will be a competition, if the win they get a rose and they are safe. They also get to take a guy/girl of their choice on a date. Guys will be voting girls off and vice versa. The twins are one, but only one of them will compete in each competition but when they go one dates, they go together. Ed is back in the pool naked, Chris H. tells him to towel up as he walks naked out of the pool in front of each other.

The first competition tomorrow is couples, they need to pair up tonight.

Reid picks Paige, Erica R. picks Nick, Chris picks Blakely: Jaclyn is the only one that has not paired up and she is upset that Ed, the drunk loser, is the only one left for her.

The next day, Ed is hung over and Jaclyn is worried that he is going to ruin the challenge for him.

It’s is time for the first competition, everyone goes outside and there are hearts suspended by cranes.  Each member of the winning couple will receive a rose and go on romantic date. The couples have to go inside the hearts and remain inside, even when they are titled forward, the couple that finds the strength to hang on the longest will win. The couple that drops first, will get one vote against them for the Rose Ceremony.

Erica R. and her partner are the first one down, Michael and Sarah, Jaclyn and Ed are out of the competition. More fall down, it is up to Brittany and David, Paige and Reid. Brittany and David are the winners, they are just fans and they are on top!

Brittany and Erica are out with David on their reward date, they are toasting over champagne and go to an amusement park. David bears all and the girls go topless as they run into the water.

Chris disappoints Blakely as a partner when he starts flirting with some of the other girls, kisses Jamie and disrespects Blakely, she feels betrayed.

David is thinking game play, he wants the twins to team up with him and tells everyone that it is going to be the fans against the veterans and he plans on voting out Erica R.

Erica R. comes out on the attack with David, she tells him that if she does stay in the house, she is going to make his life a living hell.

It’s time for the guys and the girls to cast their vote for who they would like to leave the house. When all the voting is complete, the one man and one woman who receive the most votes, will be heading home.

David is confident that Erica. R. is going home and he tells her straight to her face.  Meanwhile, Paige is worried that she is going to be sent home because of what David did. Michael breaks the news to Reid that all the guys are voting out Paige.  Reid is not happy about it, but he is going to vote for Erica R. and try to get at least one of the other men to swing their votes so Paige can stay.

Kalon is the swing vote so Reid approaches him and is glad to know that Kalon hates Erica R. and wants her to go home. Kalon is basically telling everyone exactly what they want to hear, but in the day he is going to do whatever he wants.

Ericka R. is going to be livid if Kalon votes for her and he does.

Chris “Swat” has not decided who he is going to send home, Paige and Reid forgot about him, but he does think that Erica R. is a snake, his vote is going to make all the difference.

It’s time to find out who is going home, it is Paige and Chris “Swat”, the fans are going home. Reid made it his mission for Paige to stay, but he failed, while Chris “Swat” blames David who now finally realizes he made a stupid move.

Check out what is ahead for WEEK 2 here!!