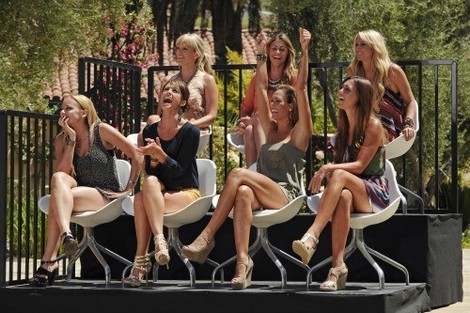 There is a love triangle on The Bachelor Pad and this week the drama heats up when Blakely and Jamie, who both think Chris is their man get a shocking surprise when Chris finds a new girl that catches his interest, Sarah! Apparently Chris goes so far as letting Jamie go for good, but he still keeps Blakely hanging on while he starts to move on to Sarah.

This weeks’ challenge involves the contestants having to answer some extremely controversial questions about each other.  The one-on-one dates also begin this week, so it’s going to be really important that the contestants choose their partners wisely. The winners of the challenge will get to play ball at Dodger Stadium or go to a movie in downtown LA.

Rumour has it that partnerships and couples are going to change this week and Kalon gets into the action when he stirs up drama in the house.

Chris wins the challenge and takes Sarah on the downtown date and while it’s no surprise to viewers that when Jaclyn wins she chooses to take Ed on the baseball date.

Now as far as the elimination goes, it’s been rumored from the beginning that the ‘Super Fans’ don’t make it past the fourth episode, so we will be saying goodbye to David when his Bachelor Pad ‘fan’ experience ends for good.

There will also be one girl leaving the show and Chris is thrilled when Jamie is given the boot, now he can concentrate his efforts on his “new” and improved trio that includes Blakely and Sarah.

Have you been watching the third season of The Bachelor Pad, what do you think of the season so far? Sound off your comments below and let us know what you think about season three.