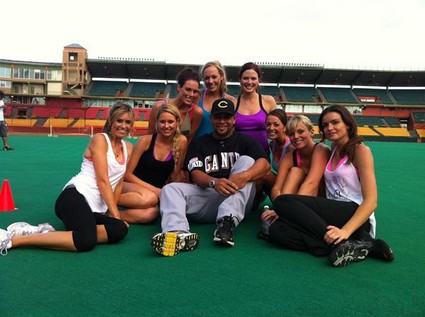 Here’s how it all goes down. Ben returns to his room and finds Courtney sitting on the stairs with a bottle of wine, two glasses and dressed in a robe. The two head down to the beach and Courtney talks him into going skinny dipping. They both remove their unmentionables and run bare assed into the ocean with the cameras rolling. Courtney basically thinks that the other women are going to hate her and essentially doesn’t give a f*ck.

What do you think about them skinny dipping? I think Courtney is a classless skank and Ben is an idiot if he let’s her stay. But you know he will, cause that’s what this show is all about, isn’t it? How come the women can read through her nastyness in the first episode and Ben still has the blinders on?

Now Nicki and Elyse get the one-on-one dates, but who really cares after Courtney’s make out session in the Puerto Rican waters with Ben.

There will be another dramatic cocktail party where Courtney toys with the other women about her skinning dipping adventure with bachelor Ben. The Rose Ceremony Elimination will bring us a shocker – one girl for sure that is heading home is Jamie and maybe Jennifer, but you will have to come back for our full official recap to get all the details. Will any of the women leave because of Ben’s naughty romp in the ocean with Courtney? Come back Monday night at 8pm to find out.