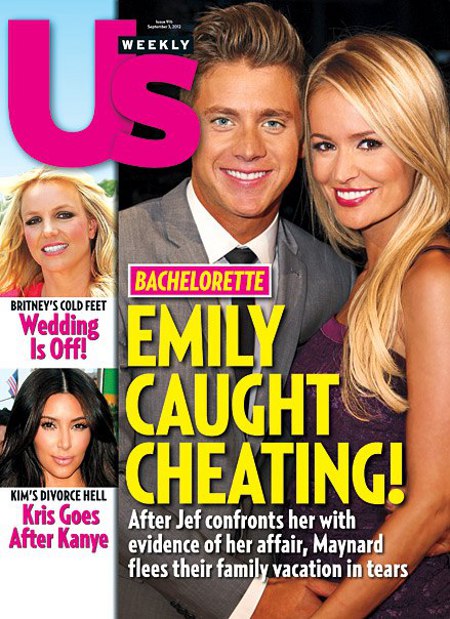 The Bachelorette star Emily Maynard may have chosen Jef Holm but, according to the newest US Weekly magazine cover, she also chose to cheat on the supposed man of her dreams in a scandalous affair. Woops. The magazine is chalking up this alleged affair to seem as if it will be an ultimate relationship destroyer, but many people out there — including Emily and Jef — aren’t quite sure what to think of the story because they both seem to be the happiest of campers . . . but is it all a facade, an elaborate mask to hide an already crumbling relationship?

The magazine’s heading reads, “Emily caught cheating! After Jef confronts her with evidence of her affair, Emily flees their family vacation in tears!” Wow, sounds dramatic and full of earth-shattering-apocalyptic news that only a couple from The Bachelorette could create, right?

The scandalous story is a four-page spread in the magazine and has all the details you could ever possibly require to believe a story filled with so much cheatery. The story says that everything seemed to be going well until, this past Sunday night, Jef started going through Emily’s cell phone only to uncover a set of racy text messages — which were from another dude!

However, current pictures of the couple, as found on Instagram, as well as current tweets by Emily, suggest a rather different story. In a message she tweeted approximately three hours before this article was published, Emily says, “Bringing him to the dark side. @jefholm just made a cat video. Love him even more now.” Hmm . . . unless Emily is actually in her room with a bucket of tears at her feet, while currently releasing super stealthy tweets about intense love and cat videos, I don’t think they’re relationship is on the rocks. The couple seems to be doing quite well. But I’ll leave that up to you. Emily Maynard cheated on Jef Holmes: False or Fact?

Image credit to US Weekly Magazine